We were thrilled to have the Commissioner of the Mayor’s Office of Immigrant Affairs (MOIA), Bitta Mostofi, join us to present the awards. Under her leadership, MOIA has created programs and policies to advance the integration of immigrant New Yorkers in to the city’s civic, economic and cultural life. 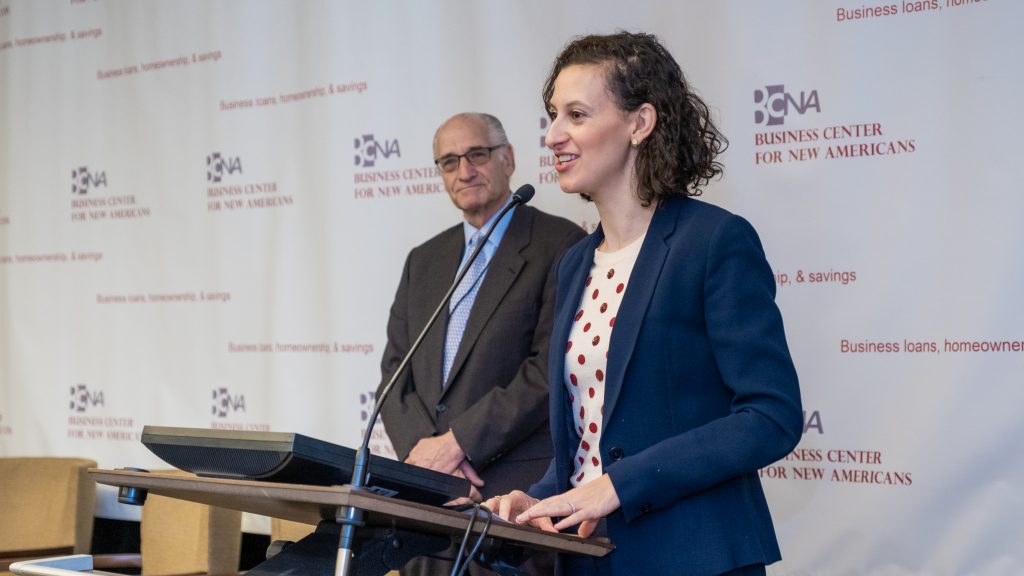 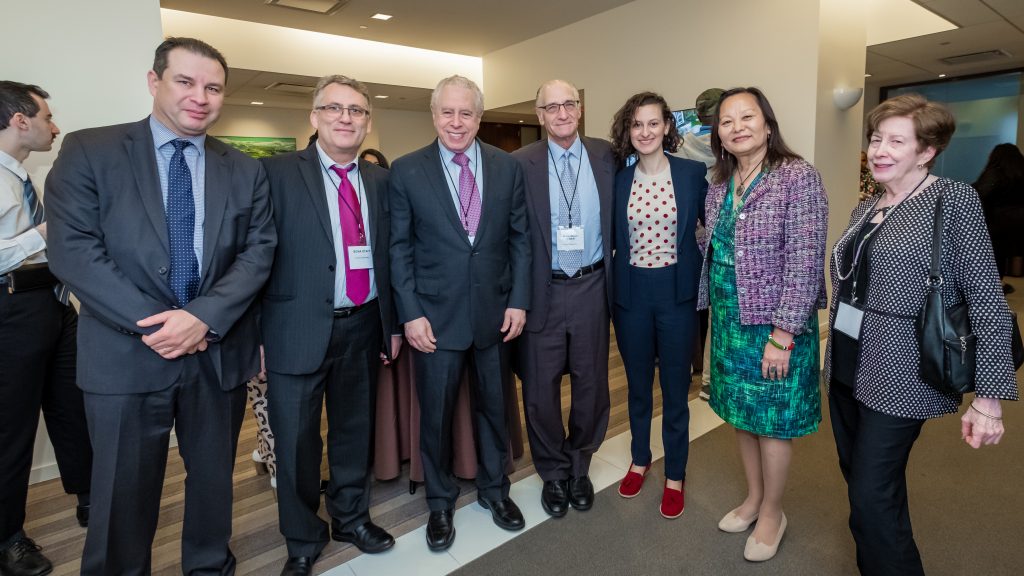 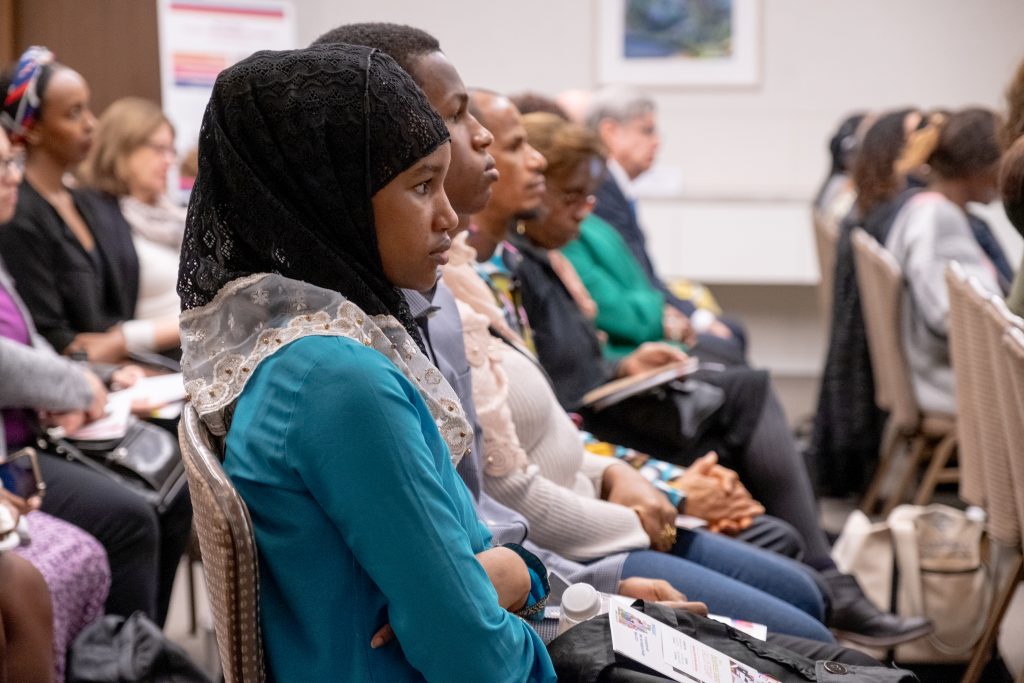 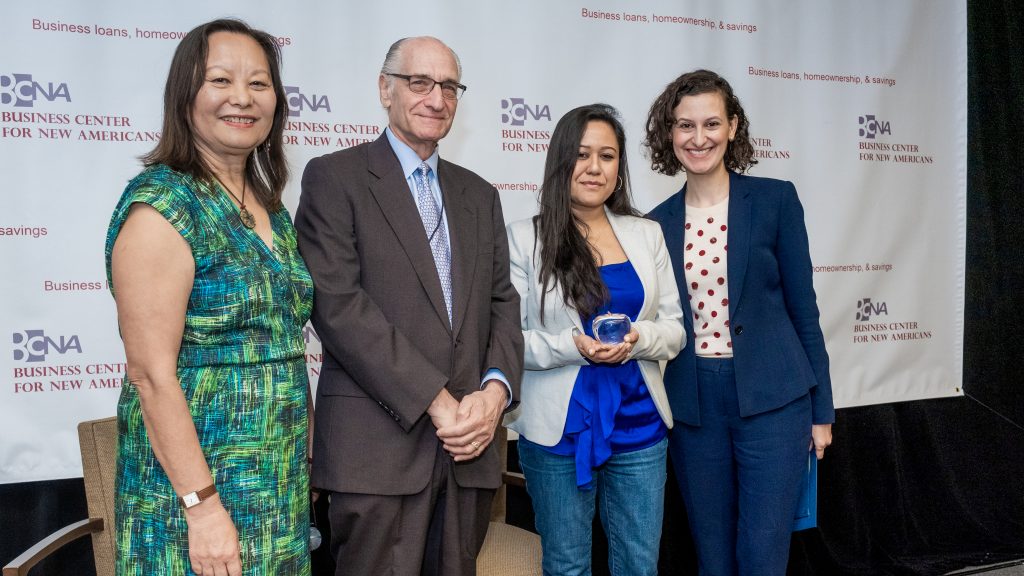 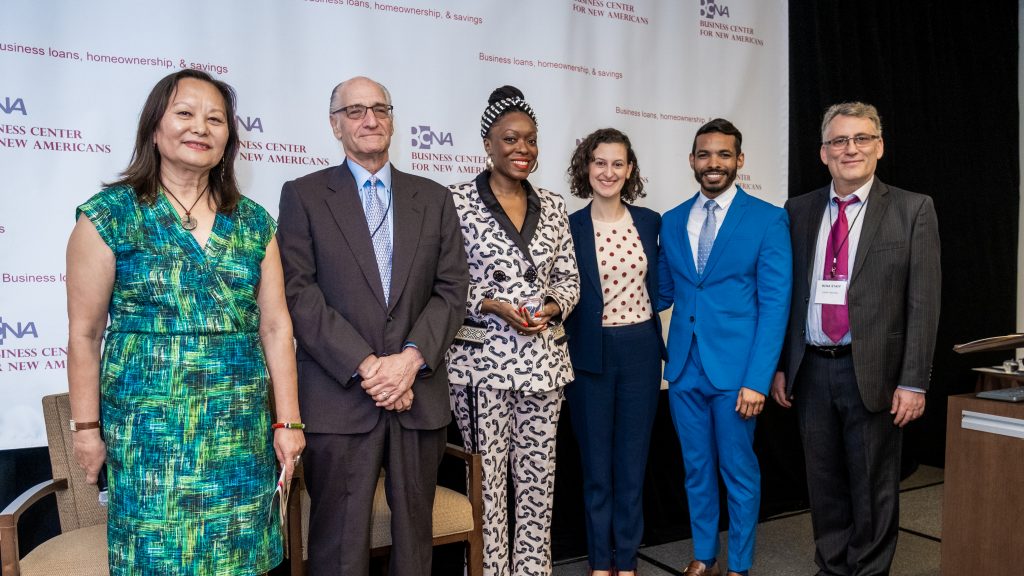 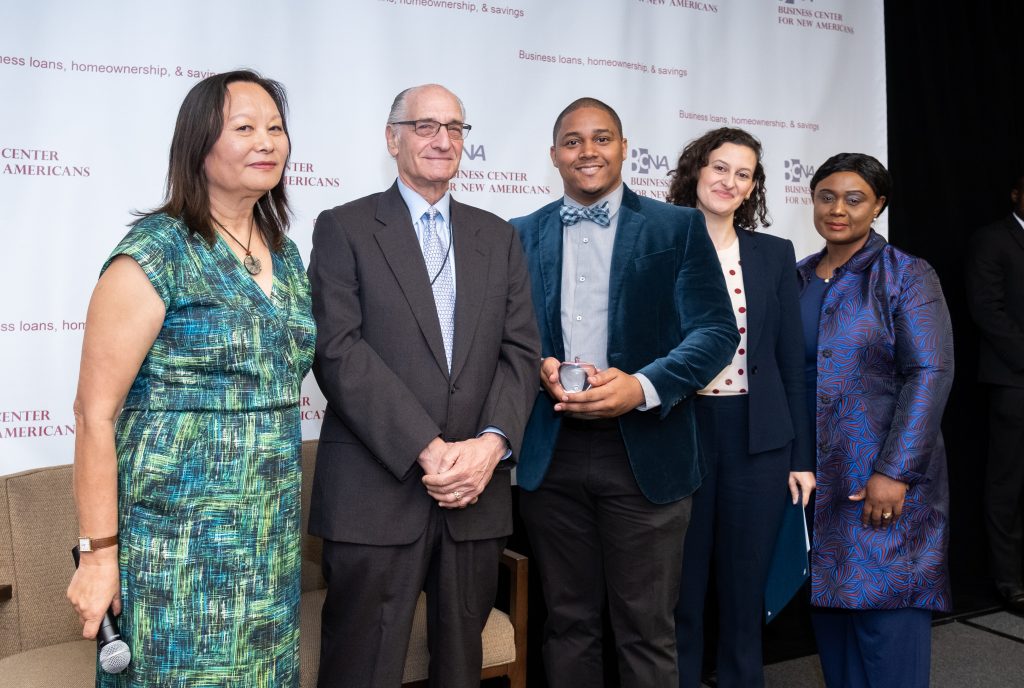 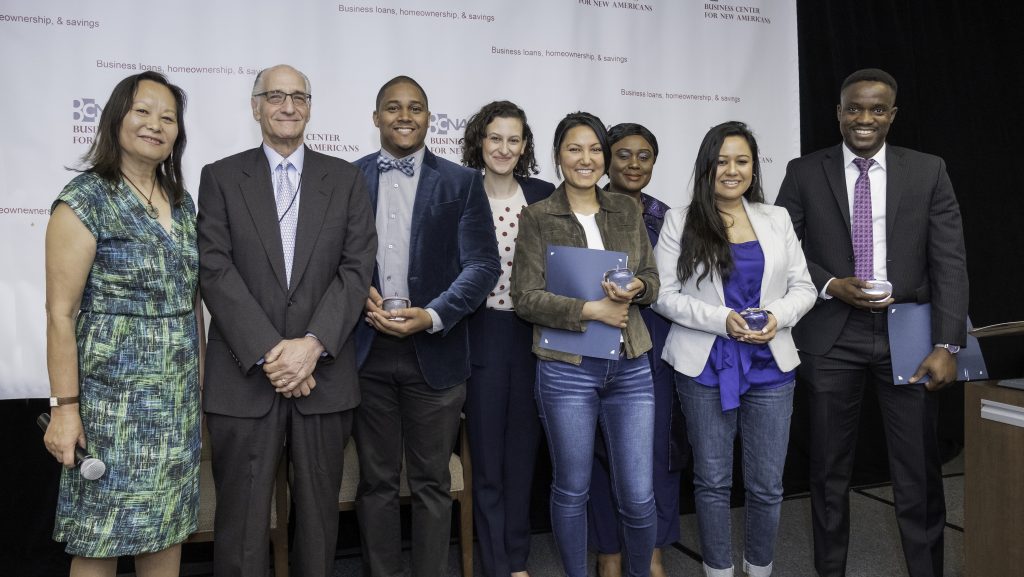 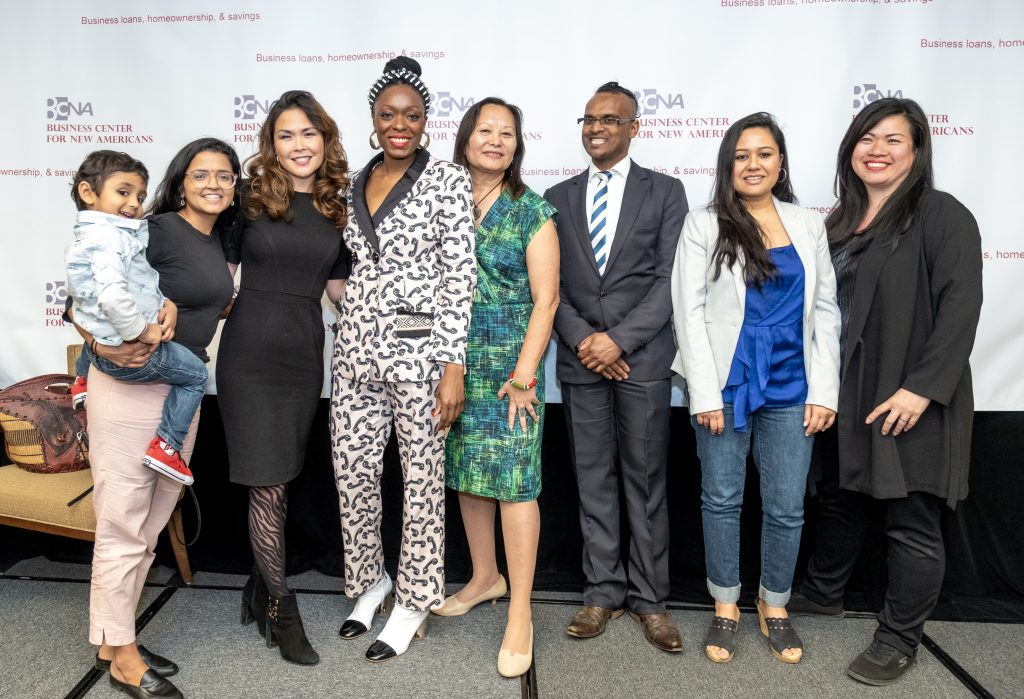 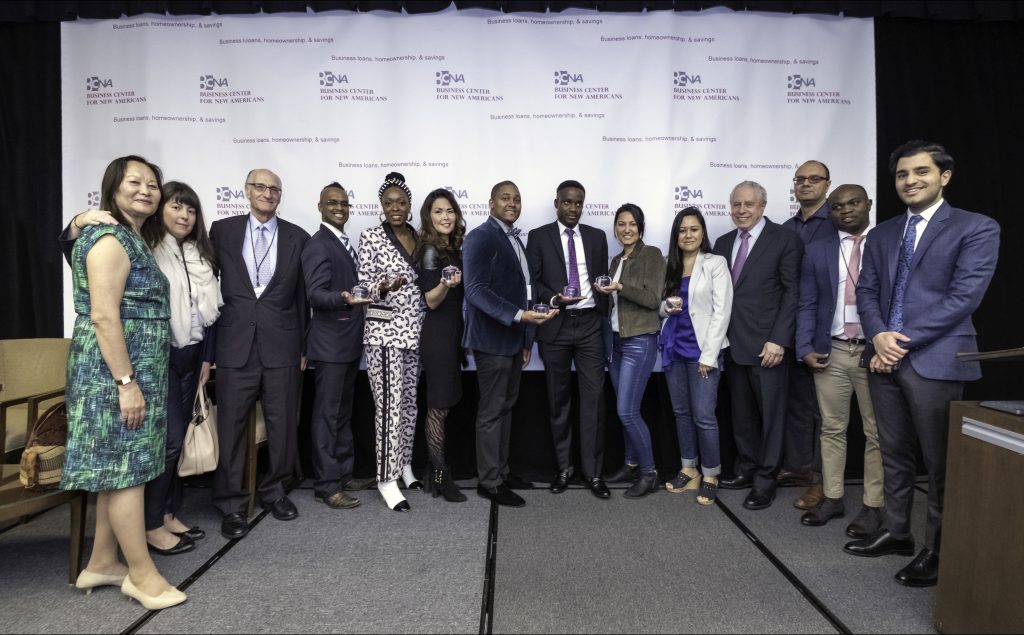 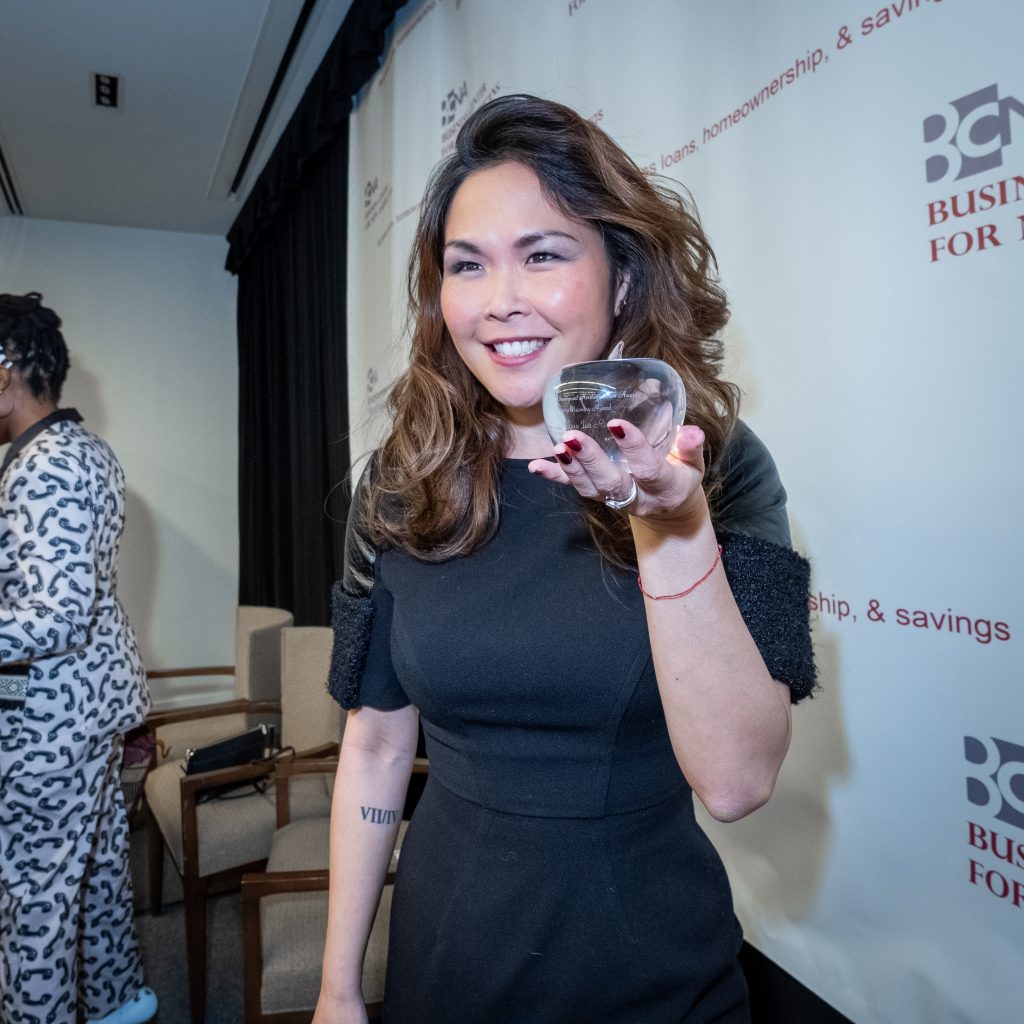 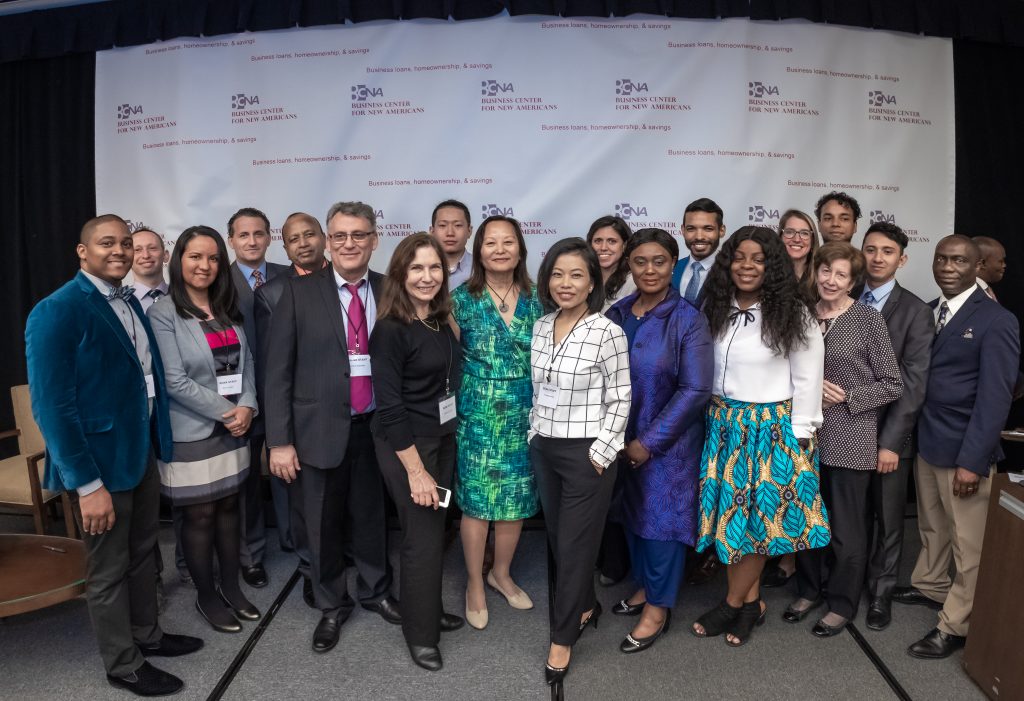 Archana Pokhrel came to the US from Nepal in 2003. She studied chemistry and sociology at Hunter College, graduating in 2010. She worked in sales, marketing and training at Time Warner and Verizon before becoming the business manager at Sapphire Spa, in Manhattan. In 2018, with her savings, she opened her own business: Lenox Spa and Nails, a spacious day spa on the Upper East Side that specializes in manicures, pedicures, and facial treatments.  A loan from BCNA helped to finance completion of construction and purchase spa equipment. Lenox Spa and Nails has created 11 full-time jobs. She now plans to take advantage of BCNA’s consulting services to improve her online media presence and increase her client base. As a member of the BCNA Voices Speakers Bureau – women entrepreneurs who are ambassadors for BCNA and experts in their business sectors – she is now available to speak to groups about entrepreneurship.

Inspired by watching her Nigerian mother create the clothes she wore as a little girl, Autumn leads a fashion brand that is colorful and eye-catching as well as ethically sourced, produced and distributed. After attending Spelman College and Parsons School of Design, she worked as an associate for several top fashion design houses before creating her own company. Her line launched with a 7-piece African-inspired collection that was featured in over 50 publications including Vogue, Ebony, Essence, Glamour and Nylon, and seen on MTV, BET, VH1 and the Oprah Winfrey Network. In 2015, she became a regular columnist for Forbes and has been a featured speaker at The World Bank, Capital One, Sirius XM, the Wharton Business Chanel, The New York Public Library and The Fashion Institute of Technology. Autumn’s line of clothing is manufactured in New York City and the business uses 20 women as consultants and freelancers. Atumn Adeigbo Designs

Nelson Nigel is a serial entrepreneur whose family emigrated from Guyana to Queens when he was 5 years old. He started working for himself when he was young, making speaker boxes and selling insurance, then setting up companies that provided technology for construction, government procurement, and government organizations. In 2016, he founded Kidmoto Technologies, a mobile app that allows families traveling to and from New York City airports to reserve cars equipped with children’s safety car seats. He has been interviewed by the Wall Street Journal, Fox Business News, and the Queens Tribune, and has received numerous awards for Kidmoto, which processed over 2400 reservations its first 2 years and has now expanded to Philadelphia, with other locations in the works.

Reza, a law school graduate from Iran, emigrated in 2017. After much research, he decided to start his own laundromat in Queens. A former IDA client introduced him to BCNA, where he attended workshops which gave him new and practical ideas about building a business and using credit effectively. He then enrolled in the IDA savings-match program, where he was able to save $4,000 and qualified to receive a matching grant to further invest in his business and hire 3 employees.

Barsha came from Nepal in 2007 and was granted asylum status. She earned an associate degree in business administration from LaGuardia Community College, and went on to Baruch College to study computer information systems, while working part time as a receptionist. She learned about BCNA through a former client, and qualified for the IDA Program. She saved $2,000, earning a full match, and was able to purchase a computer and other supplies for school.

Alasanne is a refugee from Mali who came to New York in 2012. He earned his associate degree at CUNY Hostos Community College, and is pursuing his bachelor’s degree in civil engineering at SUNY Stony Brook University. He works part-time as a car service driver because it offers him the flexibility to study. Alassane heard about BCNA’s IDA program from his sister. He saved the money required for a full matching grant of $2,000 to reduce the debt on his car loan and refinance the loan.

Panel Discussion: “How Digital Marketing Contributes to Your Business’ Success”

Deepti Sharma Kapur (Moderator) — Deepti Sharma is the creator and owner of FoodToEat.com, a food ordering, pick up and delivery website with a socially responsible business model. Launched in 2011, the site uses innovative technology to enable vendors to better service and track online customers. foodtoeat.com

Archana Pokhrel (BCNA Client) — Archana Pokhrel came to the US from Nepal in 2003. She studied chemistry and sociology at Hunter College. After graduation, she worked in sales, marketing and training at Time Warner and Verizon before becoming the business manager at Sapphire Spa in Manhattan.

Annabelle Santos (BCNA client) — CEO & Founder of Spadet, now a mother, wife, and respected mentor, Annabelle was the first member of her family born in America. Her mother worked three jobs trying to provide for her family and her dad made less than minimum wage. With a background in biochemistry and natural remedies, she began developing Spadet Products in 2008 using pure, all natural ingredients that are safe and beneficial for sensitive skin.

Nelson Nigel (BCNA Client) — “Thanks to two loans from BCNA that helped me with start-up costs, my goal now is to revolutionize global family travel and take Kidmoto from Queens NYC to Queensland Australia and beyond.”