We were thrilled to welcome keynote speaker, Sree Sreenivasan, Chief Digital Officer of New York,, and Gregg Bishop, Commissioner of the NYC Department of  Small Business Services, to honor outstanding refugee and immigrant entrepreneurs at the 6th Annual BCNA Immigrant Heritage Week Awards. The event also featured a panel discussion, “How Digital Access is Helping Women Entrepreneurs Build Connections.” moderated by journalist and Senior Fellow in Small Business at the Center for an Urban Future (CUF). See more information in our blog post. 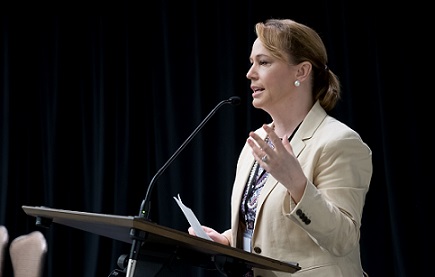 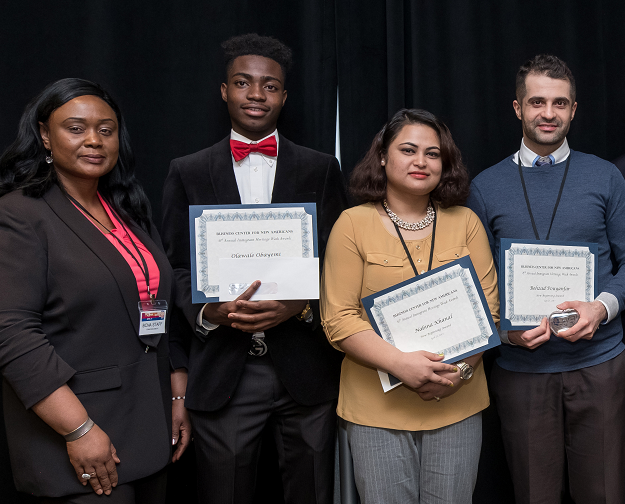 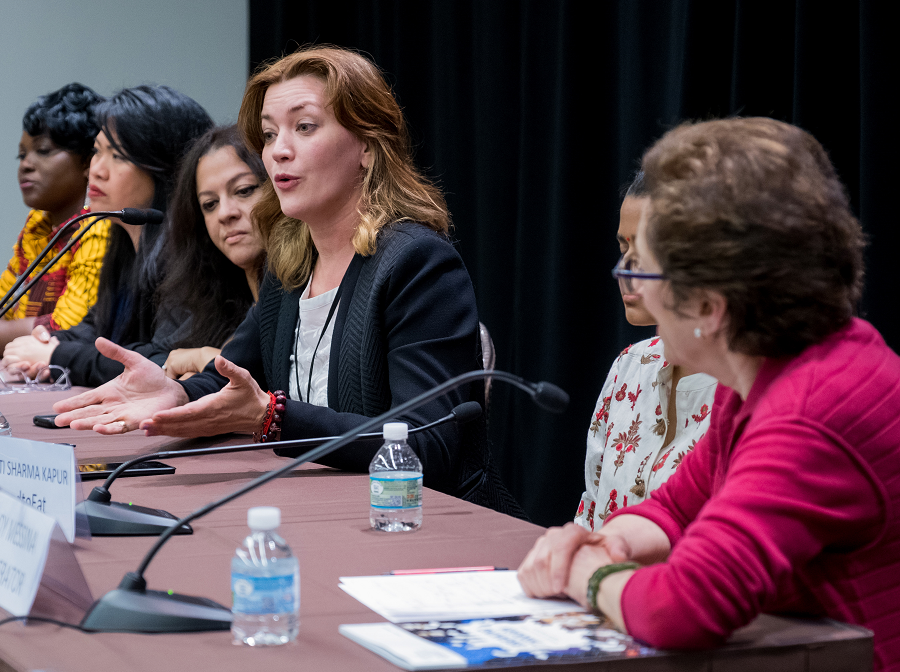 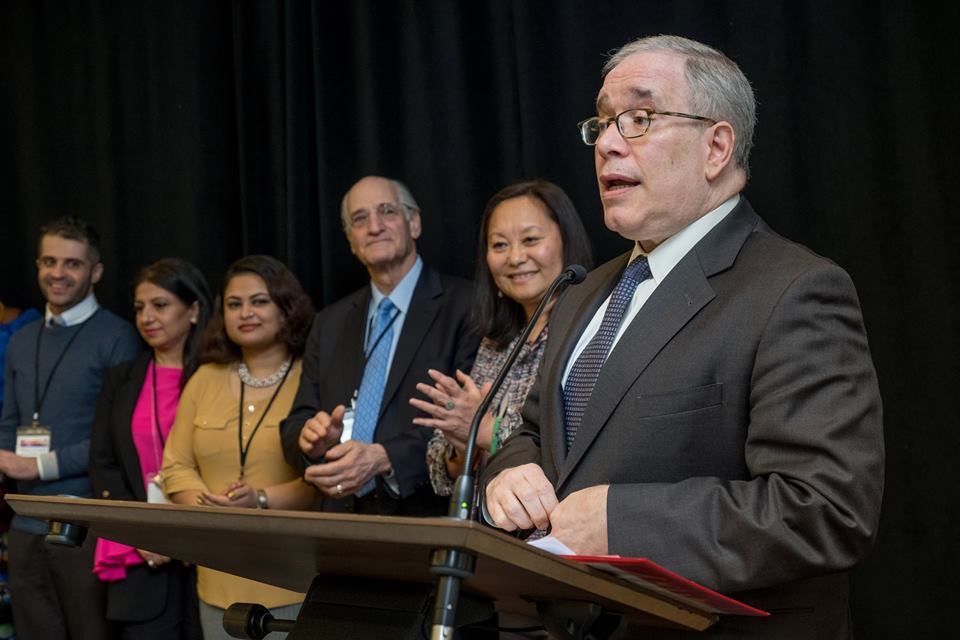 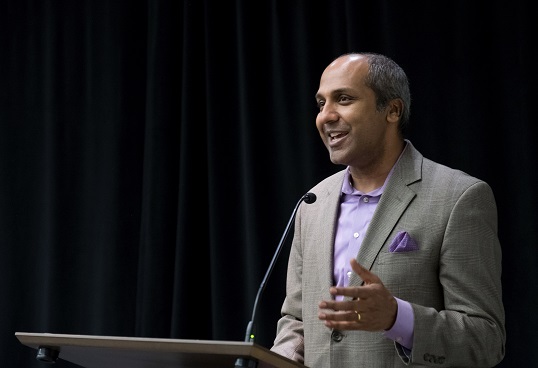 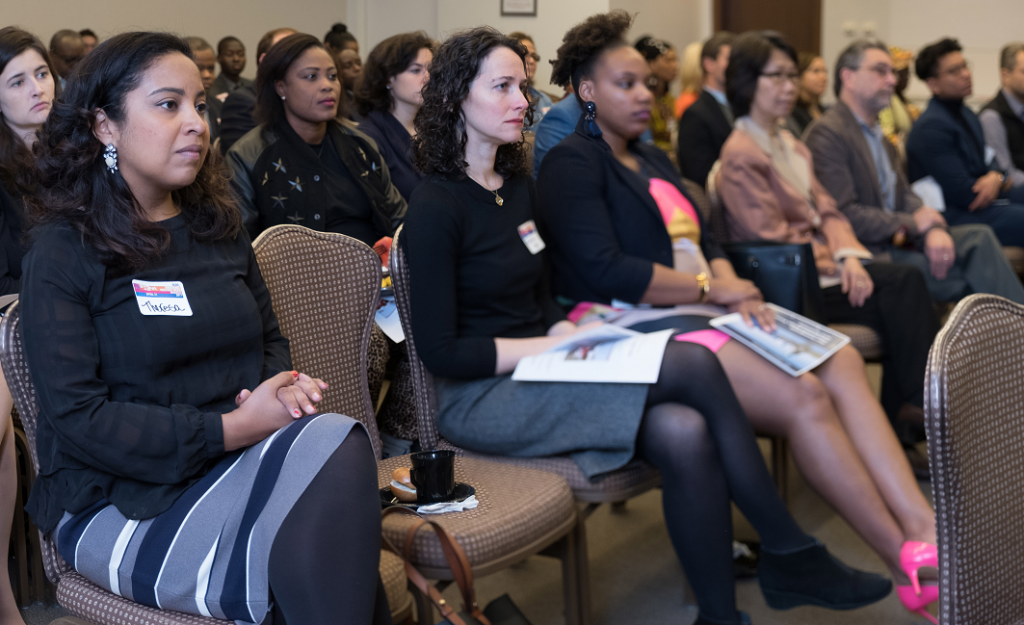 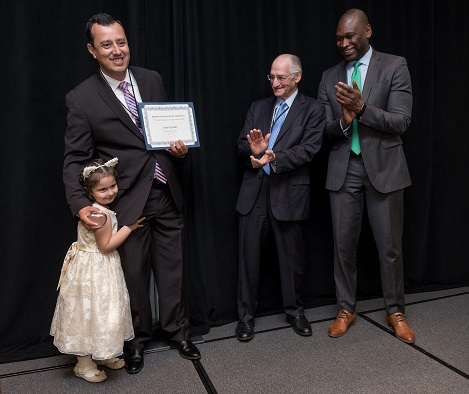 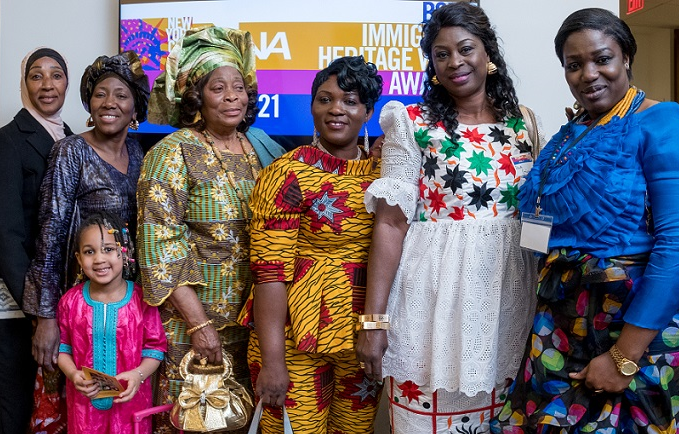 Astou Diaw came to the United States as a refugee from Mauritania in 2011. She is the owner of Brooklyn-based Astou Hair Braiding, a beauty and fashion microenterprise that specializes in traditional and modern African hair braiding, hand-made clothing, and bridal makeup. When Astou initially resettled in New York, she worked as a hair braider in another Brooklyn salon – but her goal was to start her own business. Over time, she was able to save enough money to open Astou Hair Braiding and become her own boss. A year after opening her business, Astou approached BCNA to enroll in the IDA savings program, attend workshops, receive one-on-one coaching, and obtain financing for her business. She has since rented her own space where she sees clients seven days a week for professional beauty services, tailoring, and custom clothing design.
This year Astou plans to hire two women from her community. Doing so will not only help Astou Hair Braiding increase its sales and reach, but will also provide job opportunities for other new Americans.

Juan Quelal came to the United States in 2009 from Ecuador, where he worked as a systems engineer. He works as a green taxi driver here in New York and is the creator and developer of SmartCab, an app that is used by taxi drivers throughout the United States through a contract with the National Taxi Alliance, as well as by drivers in Spain, Ecuador, Colombia, Chile, and the Dominican Republic. Juan also created and developed CabIt, a similar app that independent car services can use and customize for their clients. Juan heard about BCNA through a fellow green taxi driver, and with BCNA’s assistance, has been able to pay off debt accrued to insure the two taxis he and his wife drive. BCNA is also helping Juan create social media marketing strategies to promote SmartCab and CabIt, as well as to develop a corporate profile on social channels. Juan has several ideas for future apps, including a medical transportation app called SmartMed. His dream is to give back to his community and start a research and development fund for technology innovators in the rural areas of Ecuador.

Yevgeniy Mordkovich came to the United States in 1998 from Lithuania, where he had launched, developed, and sold several technology and marketing-based companies. In 2011, he challenged himself to find a solution that would allow him to spend more time cycling with his wife. Due to different skill and strength levels, it was difficult for them to ride together for long distances. He designed an electric bicycle that allowed her to keep up with him on longer rides and decided to turn his design into a business. In 2012, Yevgeniy approached BCNA with his a startup idea and a plan to build his first 80 bicycles. With funding from BCNA, Yevgeniy and his brother Boris put their technology, transportation, and startup experience together to bring a stylish, robust, and affordable line of electric bicycles to market. EVELO is a now a well-established company focused on making cycling accessible and enjoyable for beginners, as well as providing a solution for those who want an environmentally friendly, efficient, and fun alternative to a traditional car.

Nabina Khanal came to the United States in 2009 as a refugee from Nepal, where she had been a medical student and social activist doing volunteer work in hospitals and orphanages. Due to her strong beliefs about equal and affordable access to healthcare, as well as her affiliation with a politically progressive student union, Nabina faced persecution from rebel political groups and fled to the United States. Nabina initially worked as a cashier in Oklahoma, where she was able to put herself through community college and complete her first Associate’s degree. After graduating, she moved to New York, where she learned about BCNA’s programs for refugees. Nabina enrolled in BCNA’s IDA program to help pay for school. Once she met her savings goal, she applied for IDA matching funds and qualified for her grant. With these funds, she was able to purchase a computer and enroll in nursing classes at Borough of Manhattan Community College (BMCC). Next year, she will graduate and achieve her dream of becoming a Registered Nurse.

Olawale Obayemi came to the United States in 2014 as a refugee from Nigeria. While studying at Ladoke Akintola University, he fought for social change on campus. After graduation, he continued his activism by founding Waltop Human Development, a human rights organization. Through Waltop Human Development, Olawale fought for the rights of child laborers and brides, the illiterate, the poor, and other oppressed groups. In 2014, his organization lobbied against an anti-LGBT policy proposed by the Nigerian government. In response, vandals burned down Olawale’s office. When he was subsequently threatened with arrest and imprisonment, he sought political refuge in New York. After resettling in New York and working odd jobs for several months, Olawale decided to start his own delivery, laundry, and home cleaning business. The IRC referred him to BCNA, where he enrolled in the IDA savings program and applied for a microloan. With funding from BCNA, he launched his business – Waltop Care Services – in 2015. With profits from that, his goal is to open a laundromat business by the end of 2017. Olawale continues to fight for equal rights and social justice by volunteering for human rights organizations in New York.

Behzad Pouyanfar came to the United States in 2014 as a LGBT refugee from Iran. He originally resettled in Oregon, where he worked in quality control and production at a Microsoft factory. It was there that he developed his interest in computers and mathematics. Once he moved to New York, Behzad enrolled in the undergraduate Finance program at Brooklyn College, where he will graduate in 2019. His goal is to learn as much about computers and economics as possible while in school, and ultimately work as a Financial Analyst. Behzad works as an office assistant AW Chang Corp, a wholesale menswear business in Manhattan. When he is not studying or working, he spends his time in Brooklyn hanging out with friends and listening to music. He says BCNA was integral in making his dream to study Finance a reality.

Judy Messina  (Moderator) — Judy Messina is a journalist and Senior Fellow in Small Bsuiness at the Center for an Urban Future (CUF). Judy is an award-winning journalist with extensive experience covering business, technology, healthcare, higher education, and real estate. She launched Crain’s technology coverage at the beginning of the first Internet boom and served as a senior reporter for more than a decade.

Deepti Sharma Kapur  (BCNA Board Member) — Deepti Sharma is the creator and ower of FootToEat.com, a food ordering, pick up and delivery website with a socially responsible business model. Launched in 2011, the site uses innovative technology to enable vendors to better service and track online customers.

Natalia Konovalova (BCNA Client) — Natalia Konovalova was born in Uzbekistan in 1974. In 1995 after winning a beauty pageant in her home town she signed a modeling contract in Miami and then later moved to New York City the following year. Le’Bulga bags have been featured in the “It Bag,” a prestigious coffee table book for bags and brands that have influenced the accessory fashion industry.

Nancy Reynoso (BCNA Client) — Nancy Soria Reynosa began driving a taxi in 2009 and was one of the first group of drivers to get a Green Taxi permit in 2013. She is the spokesperson for Green Taxis of New York, a nonprofit organization that was created to educate and support green car owners and permit holders. Green Taxis of New York provides guidance on new rules and regulations and enables collective action on issues that affect green car drivers.