We were thrilled to welcome keynote speaker Chinedu Echeruo,  founder of gigameet.com, hopstop.com and tripology.com, and Sung E Bai of the NYC Mayors Office of Immigrant Affairs (MOIA) to honor outstanding refugee and immigrant entrepreneurs at the 5th Annual BCNA Immigrant Heritage Week Awards. The event also featured a panel discussion, “Apps That Get You Started – How Apps Help Entrepreneurs Build Their Businesses” moderated by Chris Sanborn, Founder & President of Sanborn Media Factor. 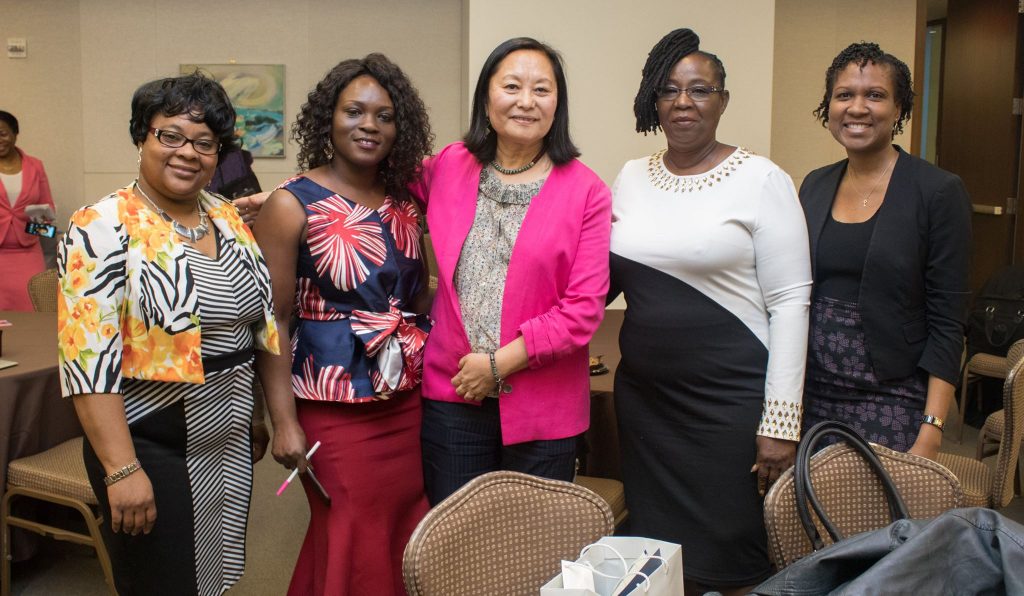 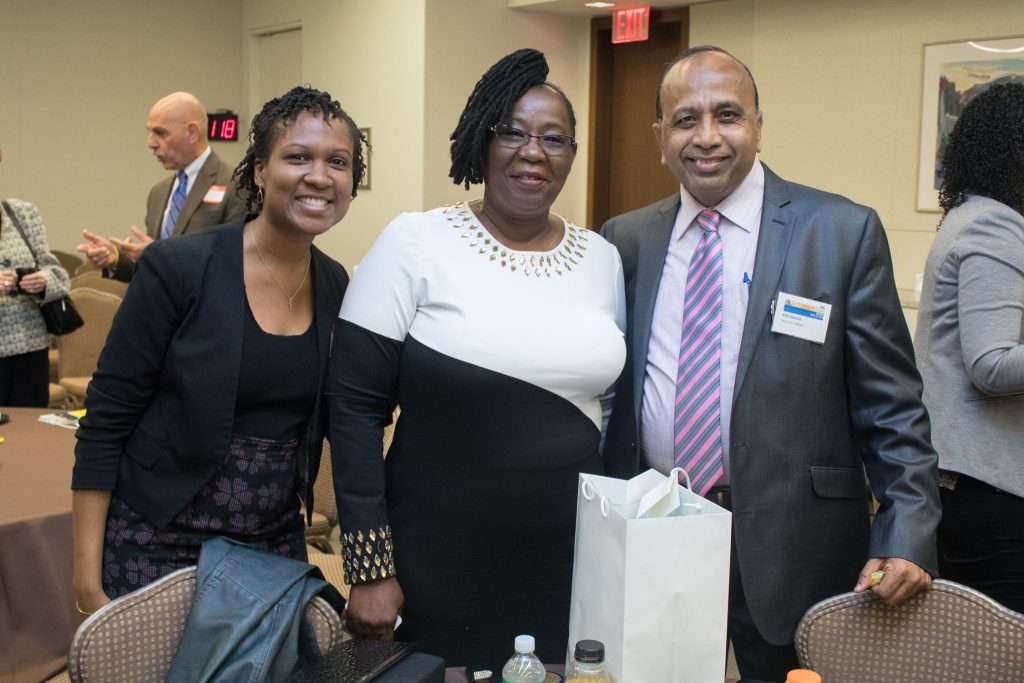 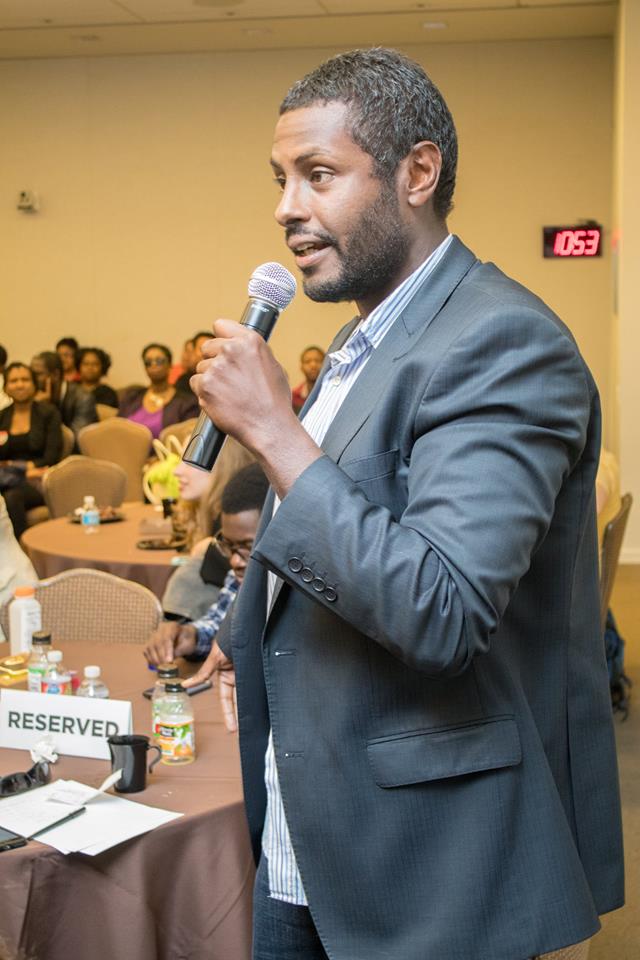 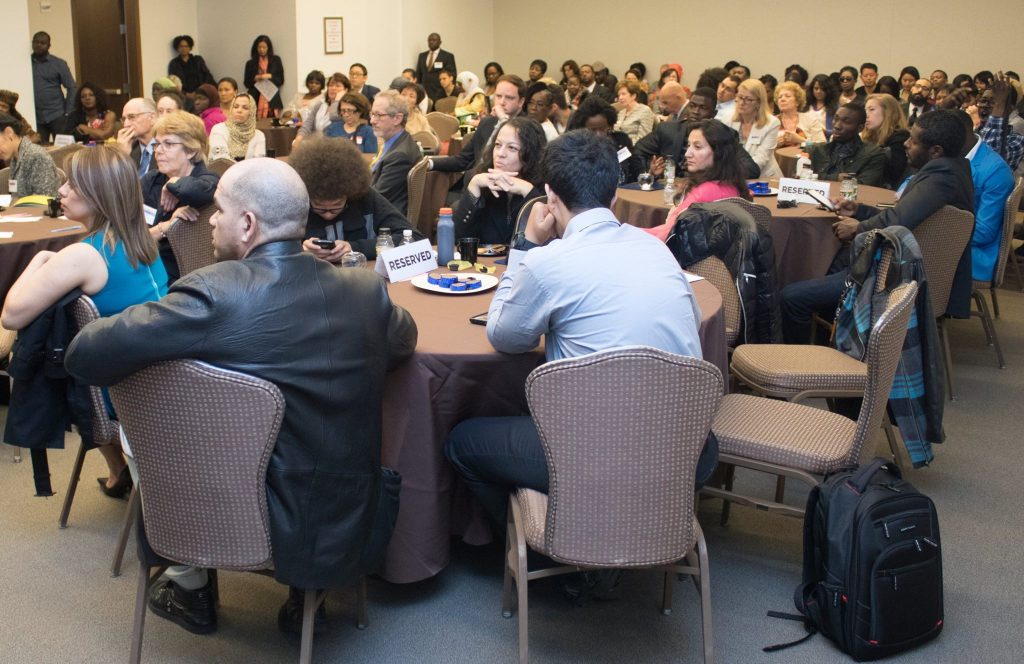 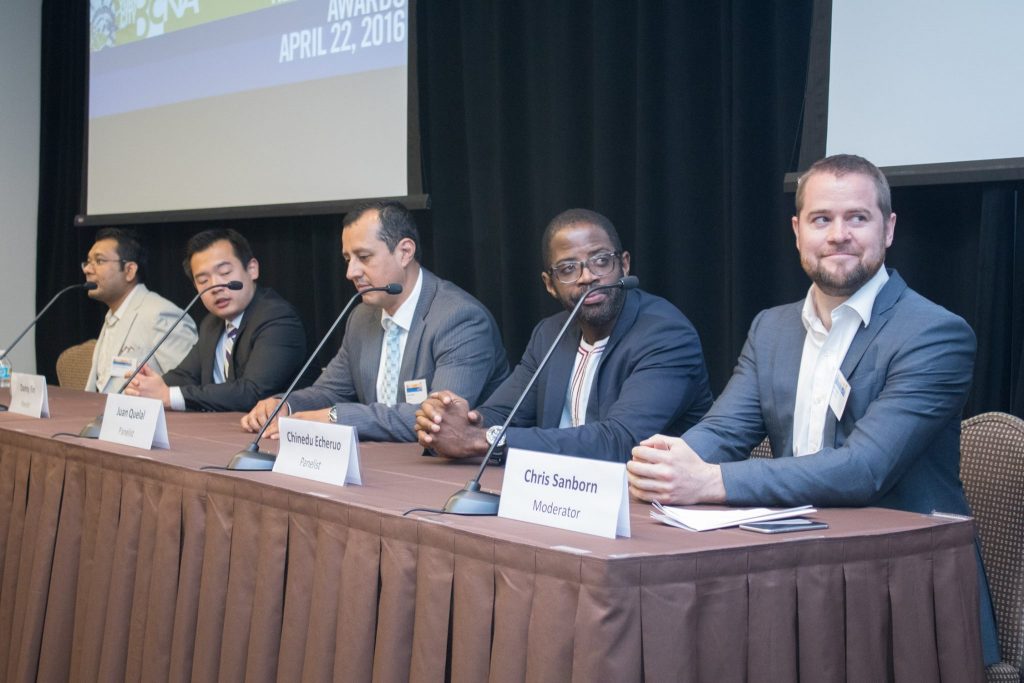 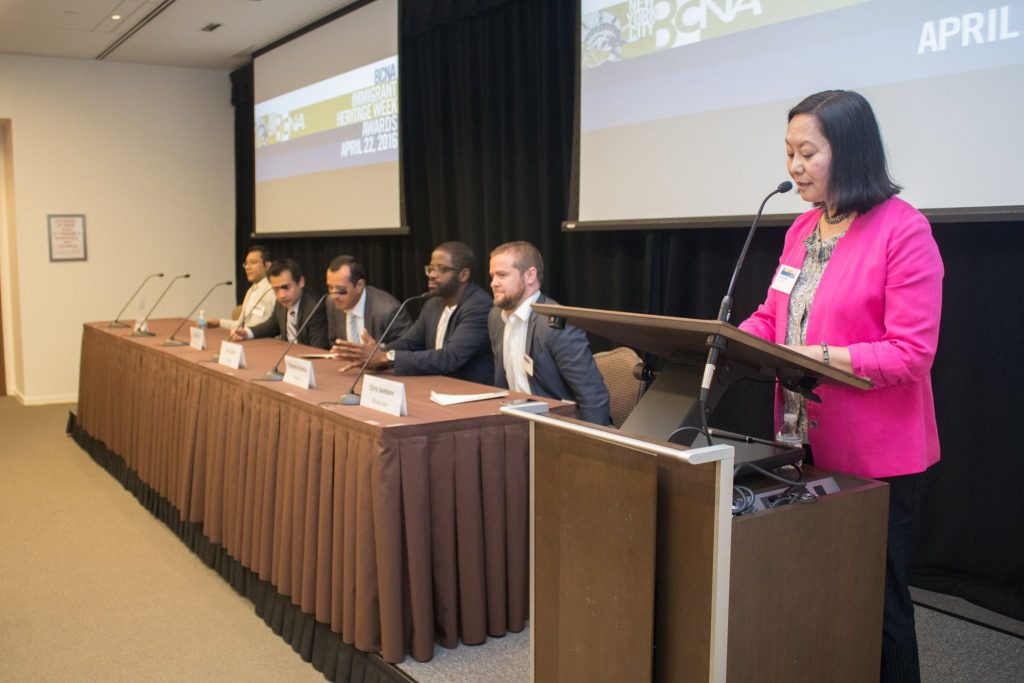 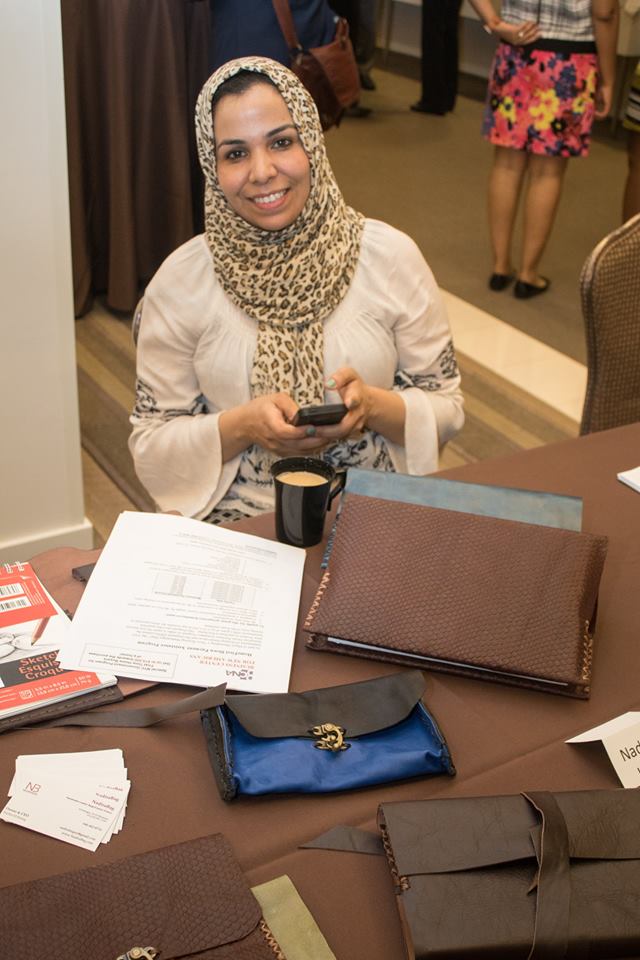 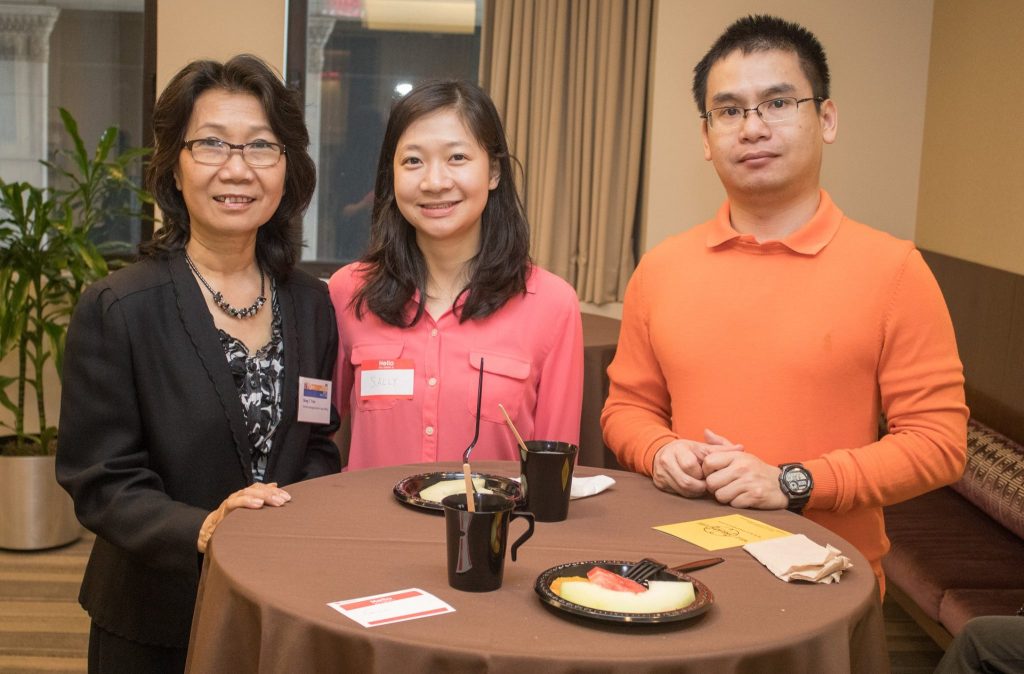 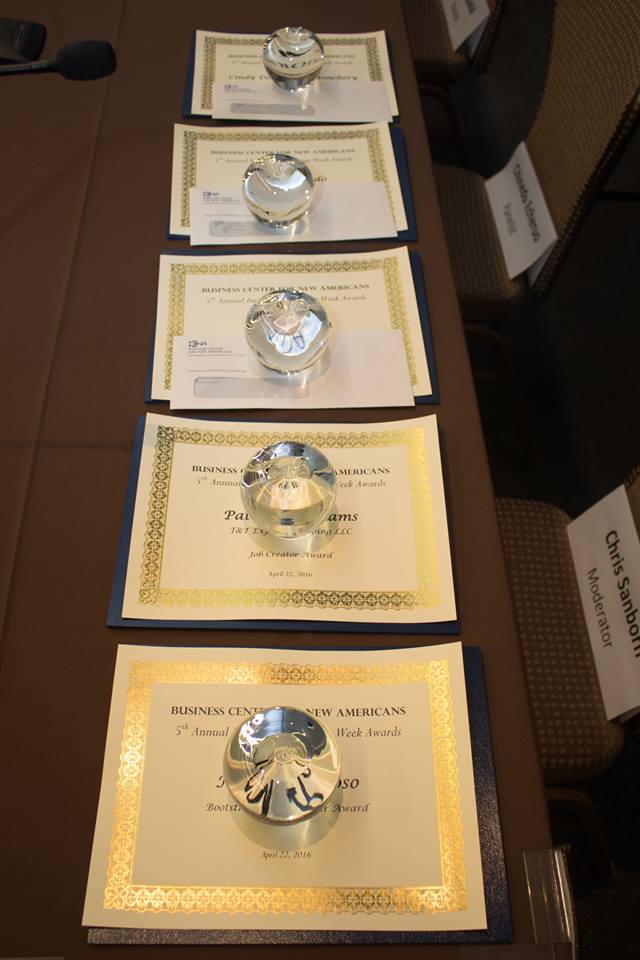 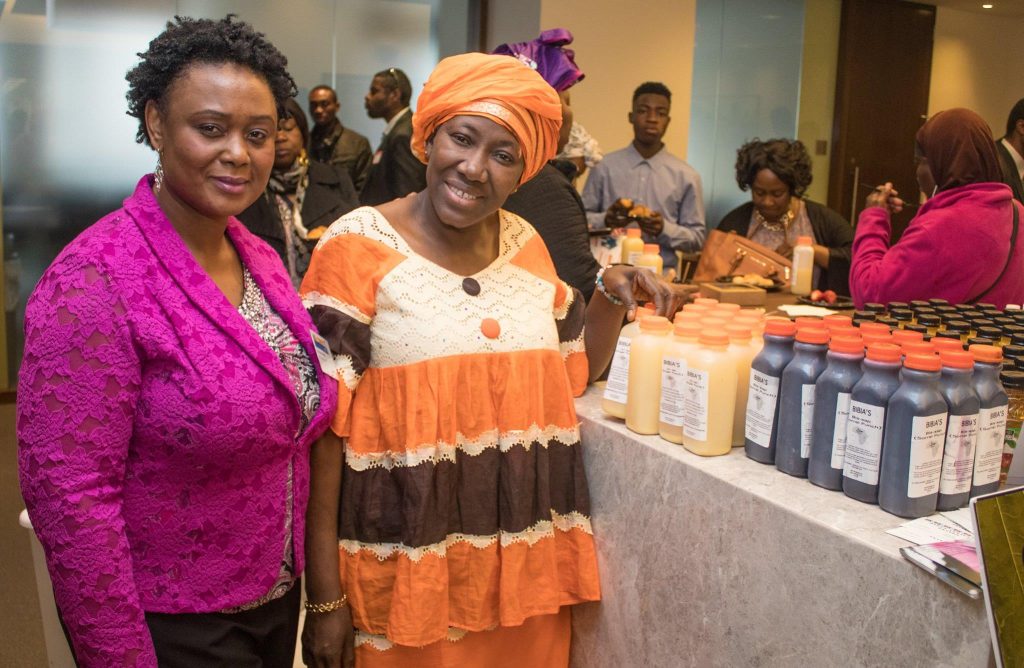 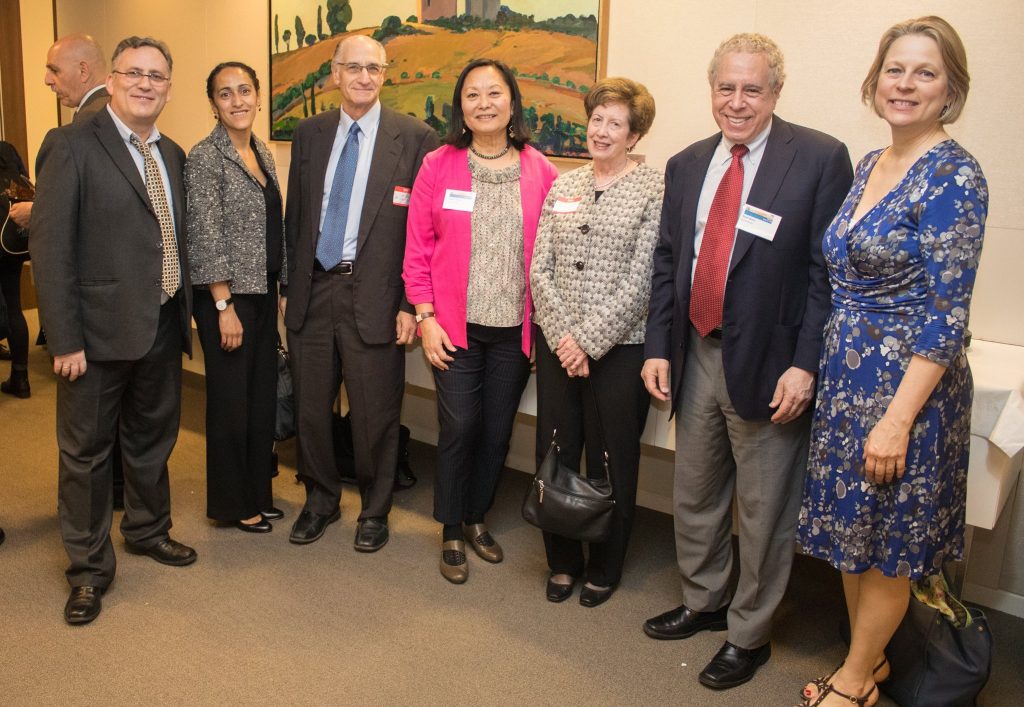 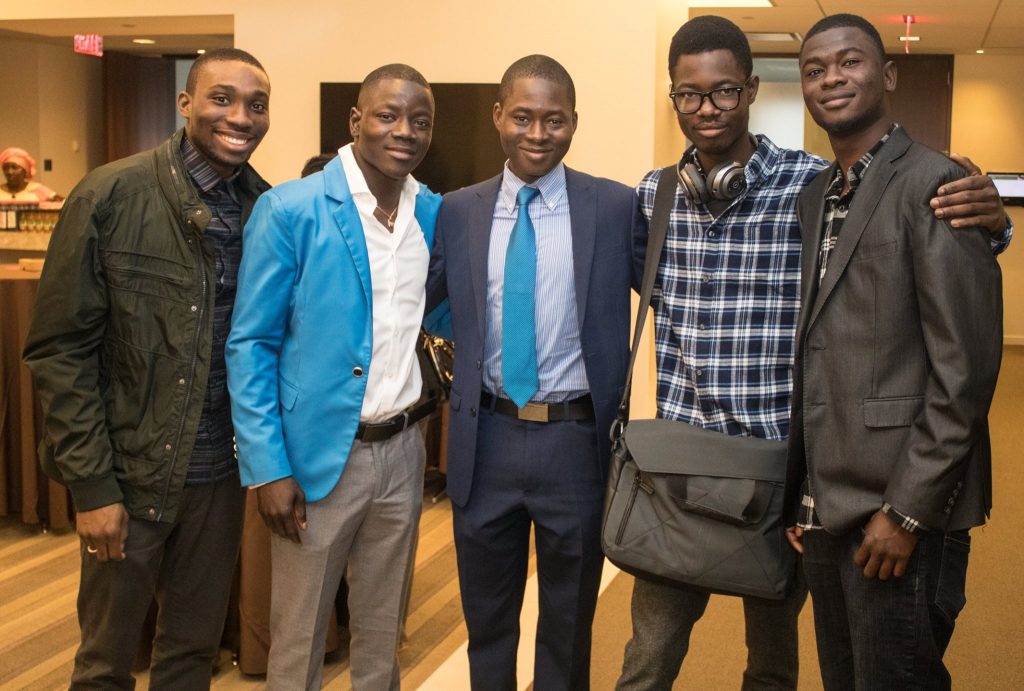 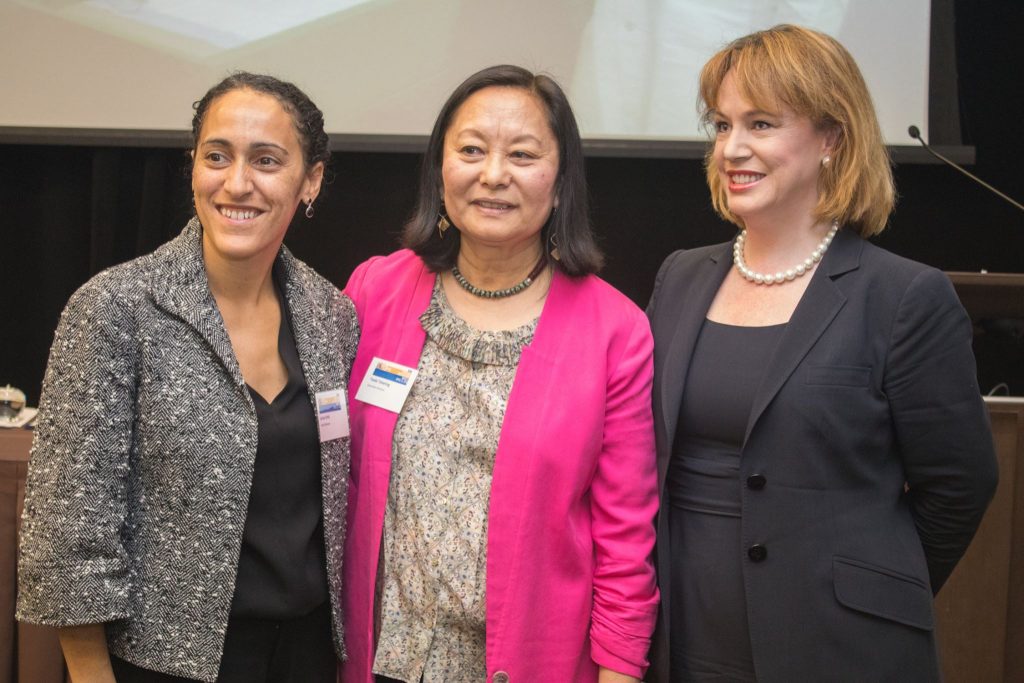 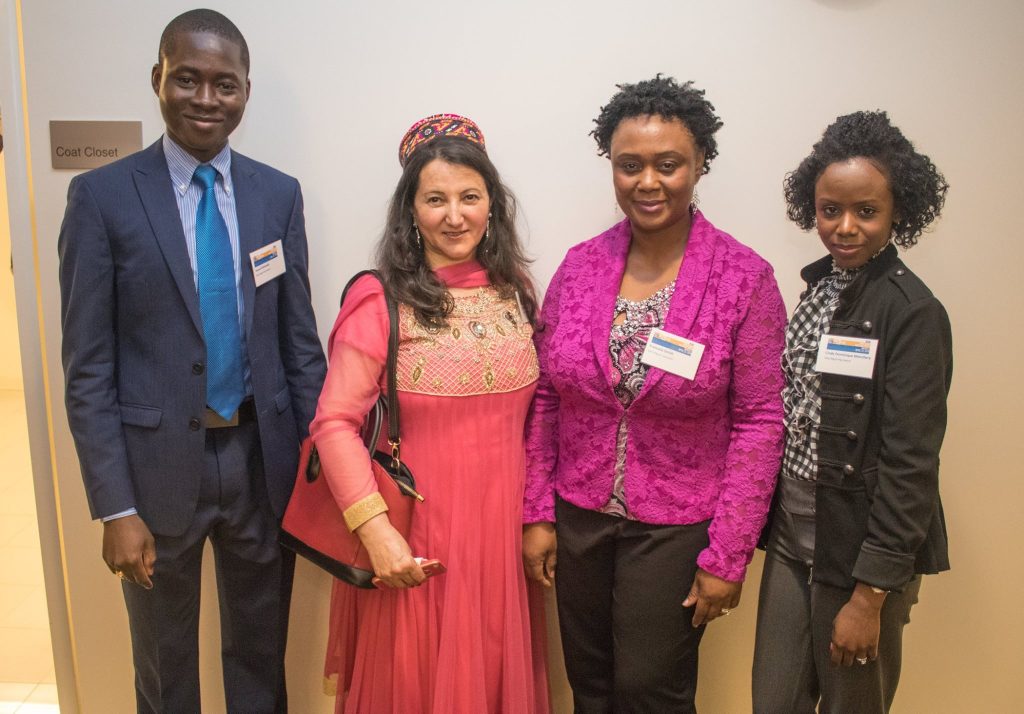 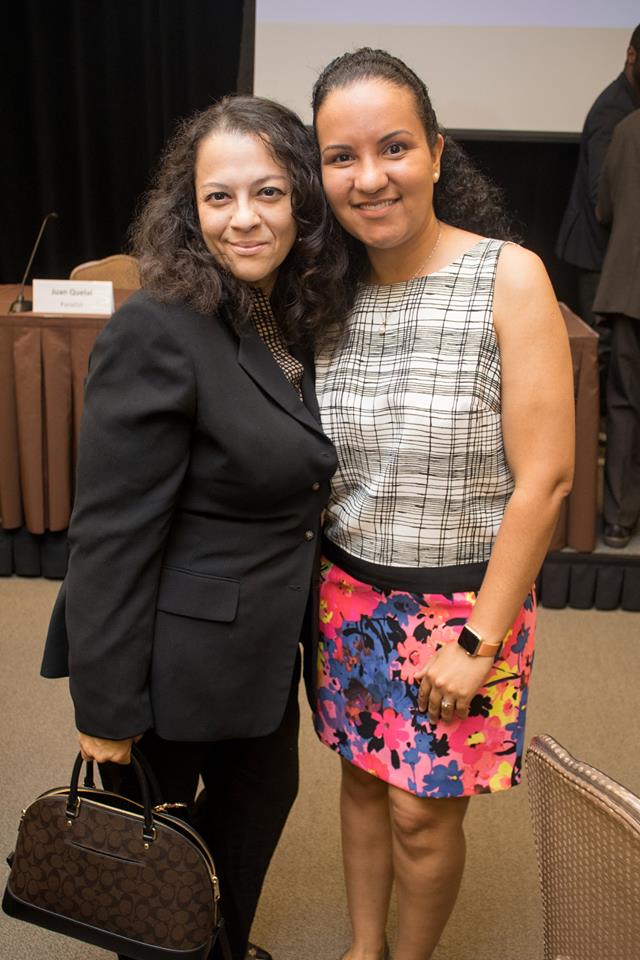 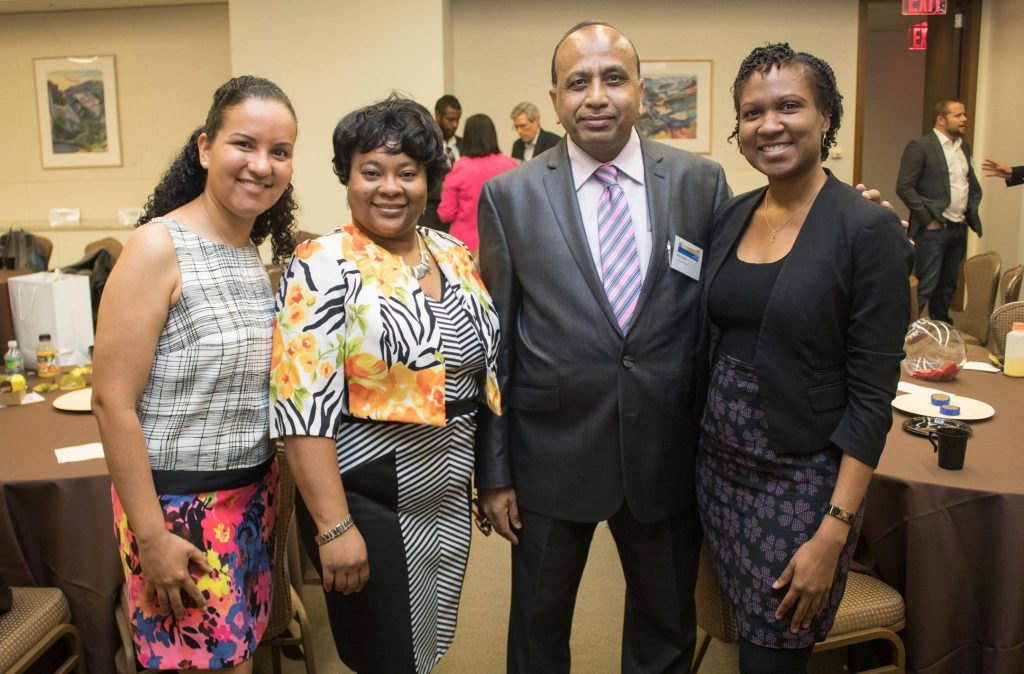 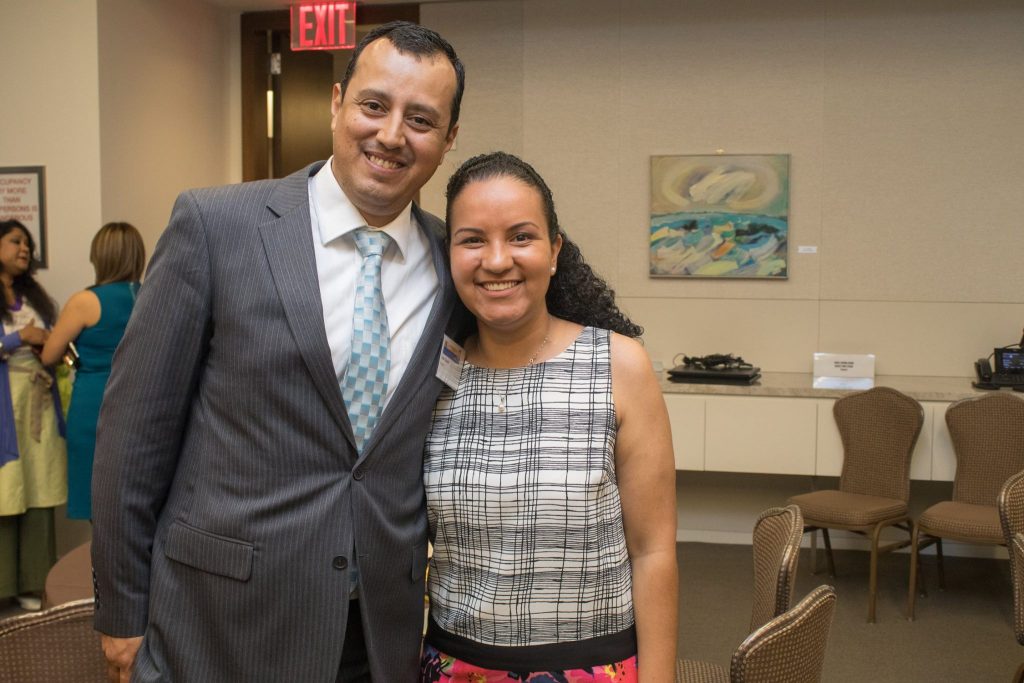 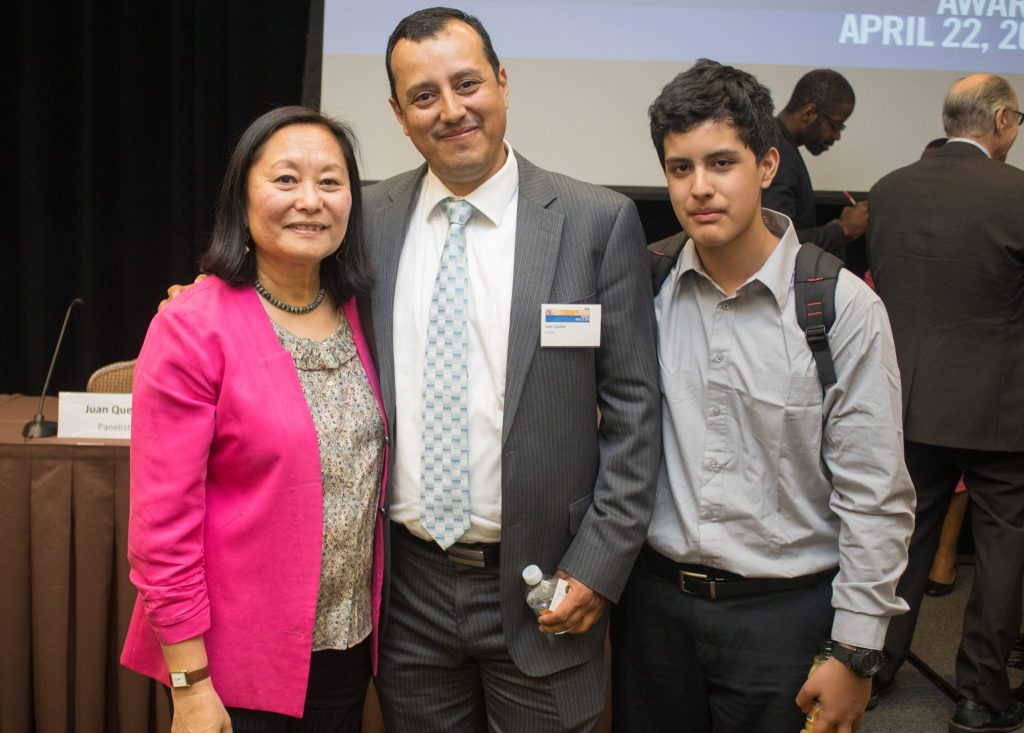 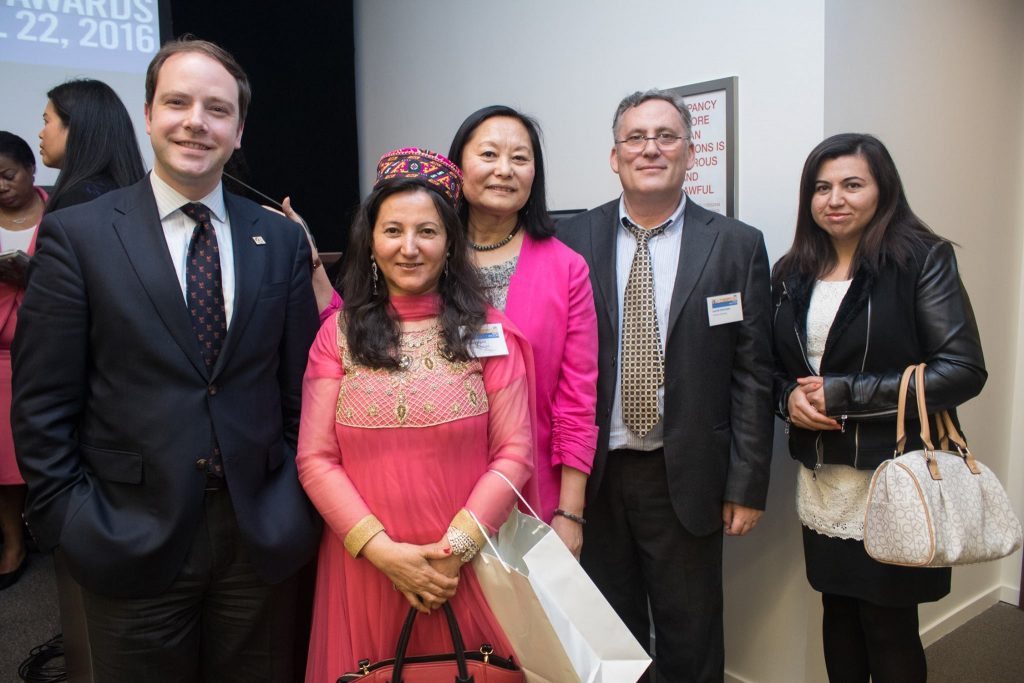 Patricia Williams, who came to the U.S. from Trinidad in 1989, is the founder and president of Brooklyn-based T&T Express Shipping, a moving company with locations in New York and Florida, and that specializes in shipping to the Caribbean. Having worked in the same field in her home country, she was able to use her knowledge of that local industry to expand her business here into that market. Patricia came to BCNA through a referral from Santander, a partner bank, and has since expanded her company to include shipping within the continental Unites States, and grown her staff to 10 employees. Her future plans include opening more service offices to further expand her business, developing new markets and increasing her sales and reach.

Nancy Soria Reynosa began driving a taxi in 2009 and was one of the first group of drivers to get a Green Taxi permit in 2013. She is the spokesperson for Green Taxis of New York, a nonprofit organization that was created to educate and support green car owners and permit holders. Green Taxis of New York provides guidance on new rules and regulations and enables collective action on issues that affect green car drivers. She also hosts a radio program for taxi drivers on Super Leona 94.3 FM! Her goal for the next five years is to see the Green Taxi industry grow strong and well established. She would like to own two or three green cars and continue to represent and support her industry. As a mother, she likes the flexible hours that being a cab driver allows, and she enjoys driving in different neighborhoods and hearing the stories of her customers.

Safida Begum came to the United States in 2010 from the Hunza Valley in northern Pakistan and began attending workshops at BCNA while she was applying for asylum. Although she had a BA and MA in Education from her native country and had been the first female school principal in her town in Pakistan, she knew she needed to become re-certified to be able to work in as a teacher or educator here. She completed her Masters degree in early childhood development and special education at Touro College in December, 2015, and is currently working at a pre-school for special education students. Her dream is to one day open her own day care business. She is also an accomplished singer, and enjoys performing at local events in her community.

Issouf Kafando is originally from Burkina Faso, in West Africa, and works as a Junior Accountant at Allan S. Joseph, CPA. He is the Treasurer of the JCI-NYC Chapter. He is also the Chairman of Loyal International Associates Network LLC, a newly incorporated company that he created with the help of a BCNA grant and loan. Services include international shipping services, airline ticket sales, and exporting used cars, beauty supplies, and bags. While his parents were also entrepreneurs, Issouf is the first person in his family to go to college. He has a Bachelors of Business Administration and is currently studying for both the CPA exam and the LSAT, in order to apply for Columbia University’s 3-year JD/MBA program in Spring 2017. As busy as he is, he still finds time to work on his novel, Born To Suffer, which he hopes to publish later this year.

Cindy Dominique Monchery came to the United States three years ago, as a refugee from Haiti. She learned about BCNA and our IDA and refugee programs while she was interning in Urban Agriculture at the Refugee and Immigrant Fund. As soon as her asylum application was approved, she applied for an IDA matching grant and qualified for $2000. With these funds, she was able to take home health aide classes, and buy school supplies and a laptop. She is currently attending LaGuardia Community College where she is taking a review class in order to pass the NCLEX-RNH Examination and get her license to work in New York as a nurse.

Panel Discussion: “Apps That Get You Started”

Chris Sanborn (Moderator) — Chris is the Founder and President of Sanborn Media Factory, a 30-person interactive agency with offices in Manhattan, Brooklyn and Los Angeles, that creates digital campaigns and products focusing on web, mobile, social, experiential, and video.  Prior to starting the Sanborn Media Factory, he worked primarily in publishing, with Newsweek Magazine, The New York Times Company, GQ, and The Irish American News.  He teaches graduate and continuing education courses in mobile media and video production at NYU’s Center for Publishing.

Deepti Sharma Kapur (BCNA Board Member) — Deepti Sharma is the creator and owner of FoodToEat.com, a food ordering, pick up and delivery website with a socially responsible business model. Launched in 2011, the site uses innovative technology to enable vendors to better service and track online customers. foodtoeat.com

Danny Bin — Danny is the Founder and CEO of Monk, a mobile platform that will enable social circles to save, borrow, and lend together. Prior to starting Monk, he was the technical co-founder of Jurispect, an enterprise legal intelligence SaaS platform.  His first start-up was an e-commerce auction site for selling textbooks that he created when he was 17 years old. He began his career as a Wall Street financial analyst and later joined Google to pursue his passion for technology and software development, before returning to his entrepreneurial roots. He holds dual BS degrees from the University of Michigan in Mathematics and Economics.

Manish Chowdhury — Manish is the founder and CEO of GoECart, a leading ecommerce software as a service (SaaS) solution that enable retailers to sell more products and services online. Under his leadership, GoECart has received numerous awards, including multiple prestigious CoDiE awards from the Software & Information Industry Association (SIIA); the 2015 Stevie Award for “Best Use of Technology in Customer Service”; and a Digital Power Players award.  He holds a BS in Computer Engineering from the University of Bridgeport as well as multiple business process patents in collaborative commerce.

Juan Quelal (BCNA client) — Juan trained and worked as an engineer in his native Ecuador, and came to the U.S. in 2009.  He works as a Green Taxi driver and wrote the code for “SmartCab,” a new app that is being used by Green Taxis and that is under consideration for use by the National Taxi Alliance. With BCNA’s help, he has paid off the debt he accrued starting his taxicab business.  He is now working with BCNA to create social media marketing strategies to promote his SmartCab app, and develop an online corporate profile. Juan’s goal is to set up a research and development fund for technology innovators in the rural areas of Ecuador.

Chinedu Echeruo (BCNA client) —is the CEO and Founder of Gigameet.com, a global cause-driven platform designed to facilitate human connection. Before becoming an entrepreneur, Mr. Echeruo worked in finance in a broad range of roles, and has been recognized as Black Enterprise Magazine’s Small Business Innovator of the Year and included in its “Top 40 under 40” list. He has an M.B.A. from Harvard Business School and B.S. in Finance and Accounting (with Honors) from Syracuse University.