We were thrilled to welcome keynote speaker Aline Sara, co-founder of NaTakallam, and Gregg Bishop, Commissioner of the NYC Department of  Small Business Services, to honor outstanding refugee and immigrant entrepreneurs at the 7th Annual BCNA Immigrant Heritage Week Awards. The event also featured a panel discussion, “How Immigrant Food Businesses Leverage the Internet as the New Word of Mouth” moderated by journalist and photographer Nina Roberts. See more information in our blog post. 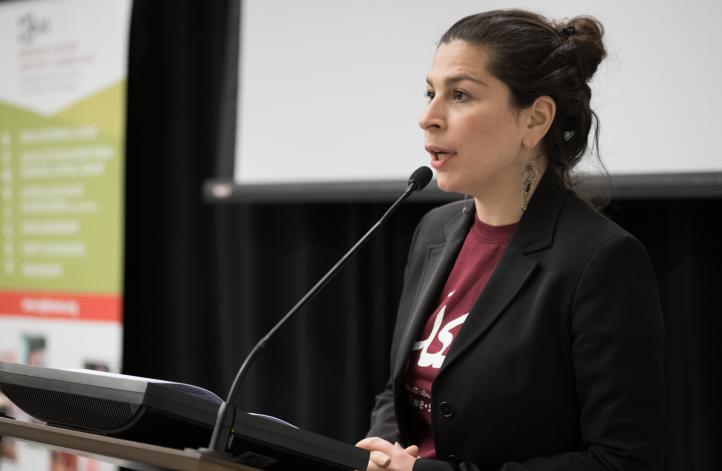 Keynote Speaker Aline Sara, co-founder of NaTakallam, a language learning platform, which leverages the internet economy to help support displaced persons’ livelihoods by pairing them with over 1,800 language learners in more than 65 countries.

NYC SBS Commissioner Gregg Bishop addressing the room before presenting the awards to our honorees. 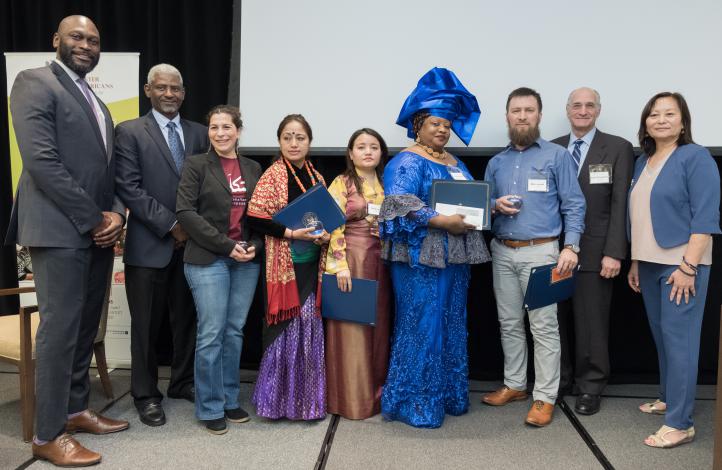 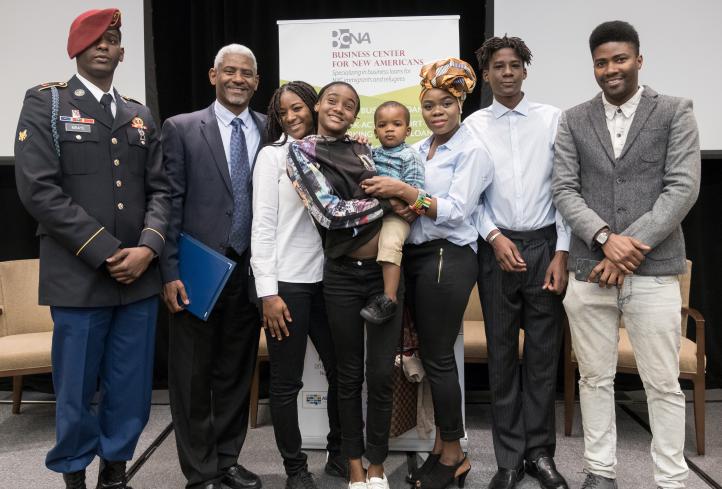 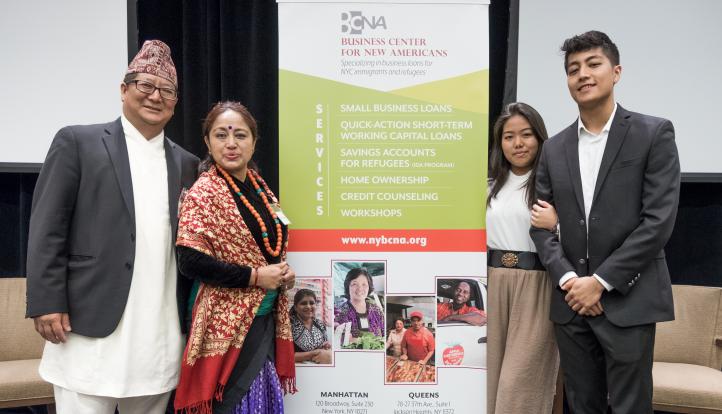 Sharmila Sherchan came to New York from Nepal in 2003 to join her husband Nabin, who immigrated five years earlier. After working at several odd jobs for the first few years, in 2008, she and her husband opened Mustang Thakali Kitchen, serving authentic Nepali food from the Mustang region. In the beginning, with young children and very little staff, it was hard to get started. But with Sharmila’s excellent culinary skills and Nabin managing day-to-day business, the restaurant not only survived, but now has ten employees. BCNA is pleased to provide loans, as well as digital marketing and website development assistance to spread the word about this family owned business. Competition has increased dramatically – when Mustang Thakali Kitchen opened in 2008, there were only a handful of Nepali restaurants in Jackson Heights. There are now over 15 – but Mustang Thakali Kitchen continues to thrive, becoming a vibrant and important part of the community.

Ahmed Mbaye started his first business in 1985, exporting fish from Africa to France and Spain. He came to the United States in 2003 as a refugee and supported himself by working in the food delivery business and offering freelance tax preparation services. In 2009, with the help of a microloan from BCNA, he launched his own import business, FoodAfrik. Through BCNA’s IDA Savings program, he was able to invest in inventory to grow his business. In 2015, he began driving for Uber, and now has a flourishing transportation business, Mbaye Transportation Services, with a fleet of 5 vehicles, which he operates along with 4 of his 10 children. They are now planning to transition to the trucking business — one son has already earned his license for long distance trucking.

Virginie fled to the United States in 2011 from Togo. Within months, she had her own business selling African groceries and general merchandise in the Bronx. Unfortunately, in 2014 an electrical fire destroyed the store. She was able to quickly secure a microloan through our Microloan Program for Refugees, and transitioned her retail business to a home-based wholesale business. A second microloan from BCNA allowed her to rebuild her inventory. By saving $4,000 through BCNA’s IDA savings-match program, she received a matching grant of $4,000 to further invest in her business.

Muhammad came to the U.S. from Afghanistan in 2014, and worked minimum wage jobs to make ends meet. In 2016, he began driving a yellow cab and enrolled in college classes in order to obtain a degree to broaden opportunities. He applied to the IDA program for refugees, which provides matching grants for savings, and qualified for a grant to help pay his tuition. Muhammad is currently driving a cab 60 hours a week while studying full time at Queensborough Community College. In spite of his busy schedule, he still finds time to devote to his wife and children.

Pema Omu Lama came to the United States as an international student in 2008, leaving behind the political and educational instability in her native Nepal. In spite of the pressures of a new country, a new language and no family support, she enrolled at LaGuardia Community College as a full-time student while working part-time as a nanny. She graduated from BCNA’s IDA program and will complete her associate’s degree in Healthcare Management this spring, with plans to continue studying for a bachelor’s degree.

Panel Discussion: “How Immigrant Food Businesses Leverage the Internet as the New Word of Mouth”

Deepti Sharma Kapur (BCNA Board Member) — Deepti Sharma is the creator and owner of FoodToEat.com, a food ordering, pick up and delivery website with a socially responsible business model. Launched in 2011, the site uses innovative technology to enable vendors to better service and track online customers. foodtoeat.com

Godshelter Kwesi Oluwalogbon — Godshelter Oluwalogbon came to the U.S. in 2011, worked his way up to sous-chef at Zabar’s, then began selling meals out of the back of his car by the Nigerian embassy. In 2015, he and his wife Bisola upgraded to a food truck and launched Vendy Award-winning “DF (for Divine Flavored) Nigerian”. He is a member of the Street Vendor Project. divineflavoredcatering.com

Nabin Sherchan (BCNA Client) — Nabin Sherchan came from Nepal in 1998. He and his wife Sharmila opened Mustang Thakali Kitchen in 2008. Nabin manages the daily business operations, while Sharmila creates and cooks signature dishes from the Mustang region of Nepal. http://thakalikitchen.com/

Denys Gorbatiuk (BCNA client) — Denys came to the U.S. in 1998 from Moldova. He gave up practicing law to pursue his dream of creating ready-to-eat, high-quality, gourmet hot dogs. In 2011, he founded Den’s Hot Dogs, and launched his first product in 2014. Den’s Hot Dogs are now sold throughout 19 states. denshotdogs.com

Manal Kahi — Manal, CEO & cofounder of Eat Offbeat, came to the U.S. from Lebanon in 2013. She began making and sharing her own hummus, which was so popular, she and her brother Wissam started a company. It has since grown to provide jobs for talented refugee home cooks from all over the world. eatoffbeat.com