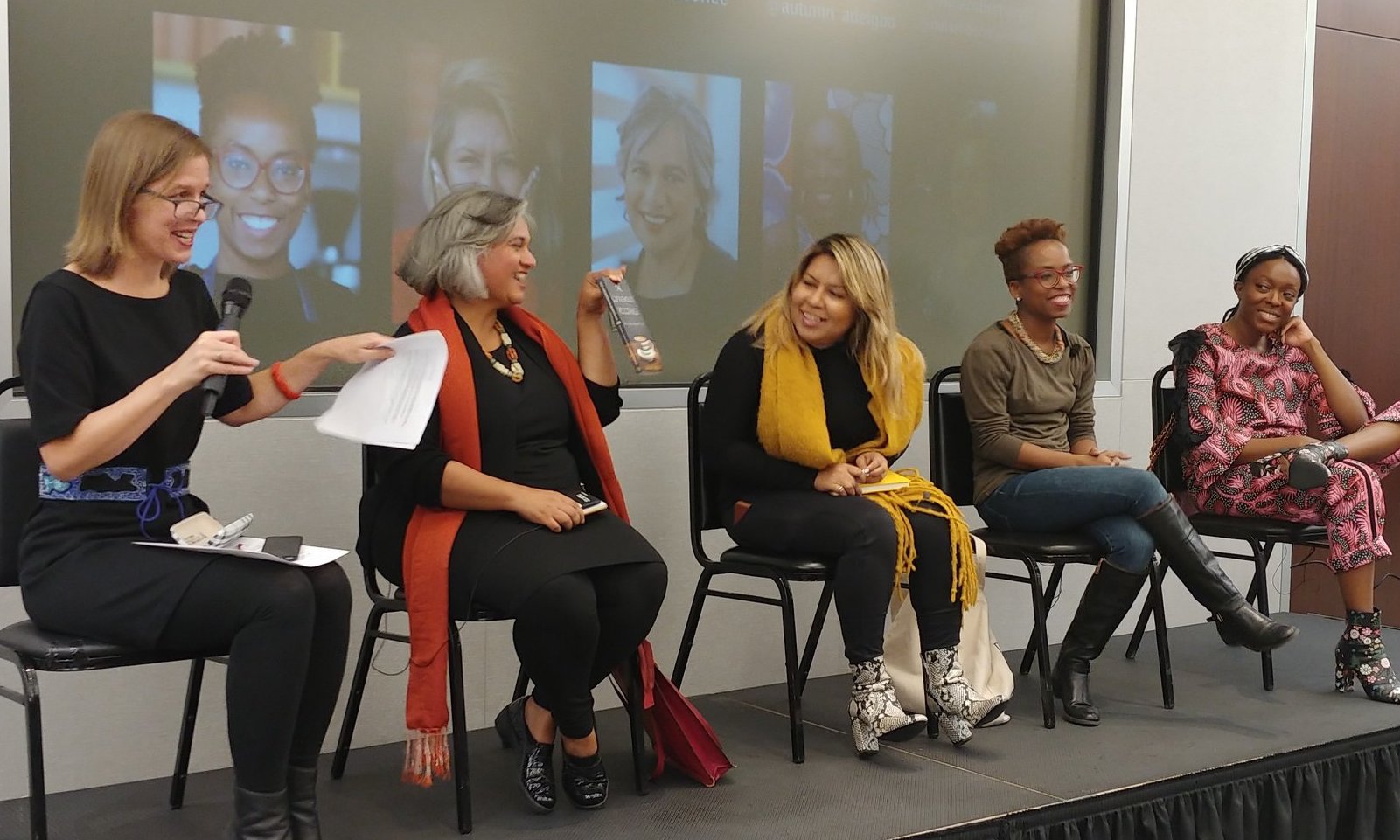 Proud to Say: “She Made It”

On December 5, we were proud to present “She Made It,” an event spotlighting four women – all immigrants, all entrepreneurs – who created successful businesses making and selling their own products. Whether motivated by passion, or driven by the desire – or opportunity – to fill a gap in the market, they all overcame similar challenges – understanding who their customers are, pricing, sourcing, and work/life balance.

The over 150 attendees left inspired by their stories and with valuable insight into how they, as entrepreneurs, can overcome their own challenges to succeed with their own businesses.

Panel member Sufia Hossain launched Silly Chilly Hot Sauce in 2016, inspired by a passion for international cuisines with a Bangladeshi touch, and is now in over 200 stores. Sufia shared that she believes that farmers are the backbone of our society and her mission is to use only the freshest, handpicked ingredients sourced locally from organic farmers, combined with industry best practices for her vegan, gluten-free hot sauces. When asked about an important lesson that she has learned, she recounted advice she had gotten from a mentor: “Paying your vendors on time and having good relationships goes a long way to get you the best deals.”

BCNA client Shelly Marshall created Island Pops with her husband Khalid when, having just returned from a vacation in her native Trinidad in 2014, she found herself sick and laid up in bed craving Trinidandian Soursop ice cream. Khalid couldn’t find any in New York store and tried to make the ice cream himself. While it wasn’t perfect, it was the moment the couple realized that there was a gap in the market for traditionally made homemade Caribbean ice cream and decided to do something about it. A year later, Shelly attended the Penn State Ice Cream Short Course then, after many months of testing flavors and recipes, Island Pops was born. Island Pops opened its flag ship store in Brooklyn in 2018 to rave reviews with flavors like coconut, rum sorrel, ovaltine, and coffee biscuit. She shared with the audience that their current goal is to increase wholesale accounts.

Panelist Sarina Prabasi and her husband started an independent coffee shop in – Buunni Coffee – when they moved to New York from Ethiopia in 2011.  With their flagship cafe in Washington Heights, and upcoming locations in the George Washington Bridge Terminal and in Riverdale, Buunni Coffee features high quality, ethically sourced organic Ethiopian coffee beans from farmer-owned small enterprises and focuses on coffee and community. When asked what advice she’d give the aspiring entrepreneurs in the room, she laughed, admitting that she had done everything that business coaches advise founders not to do! She stressed however the importance of getting help to develop financial plans with projections that are realistic.

BCNA client Autumn Adeigbo founded, created, and designs her own line of women’s clothes that are ethically sourced, produced, and distributed in addition to being colorful, elegant, and eye-catching. Inspired to become a fashion designer by watching her Nigerian mother sew the clothes she wore as a little girl – and got her voted “Best Dressed” in 4th grade – she started her colorful, women-focused brand with a mission of positively impacting the lives of women in both Africa and the United States. She launched a collection of 7 African inspired dresses while hostessing at NYC hot spots and pitching her collection to magazine editors as she sat them at their tables to dine, a collection that went on to be featured in over 50 publications and TV shows, including Vogue, Ebony, Glamour, MTV, BET, and the Oprah Winfrey Network. Autumn described how she has successfully targeted venture capitalists to invest for her business.

This very special evening was presented in partnership with SCORE NYC, for New York Women in Business and NY CDFI Women, with the generous sponsorship of the New York Women’s Foundation.