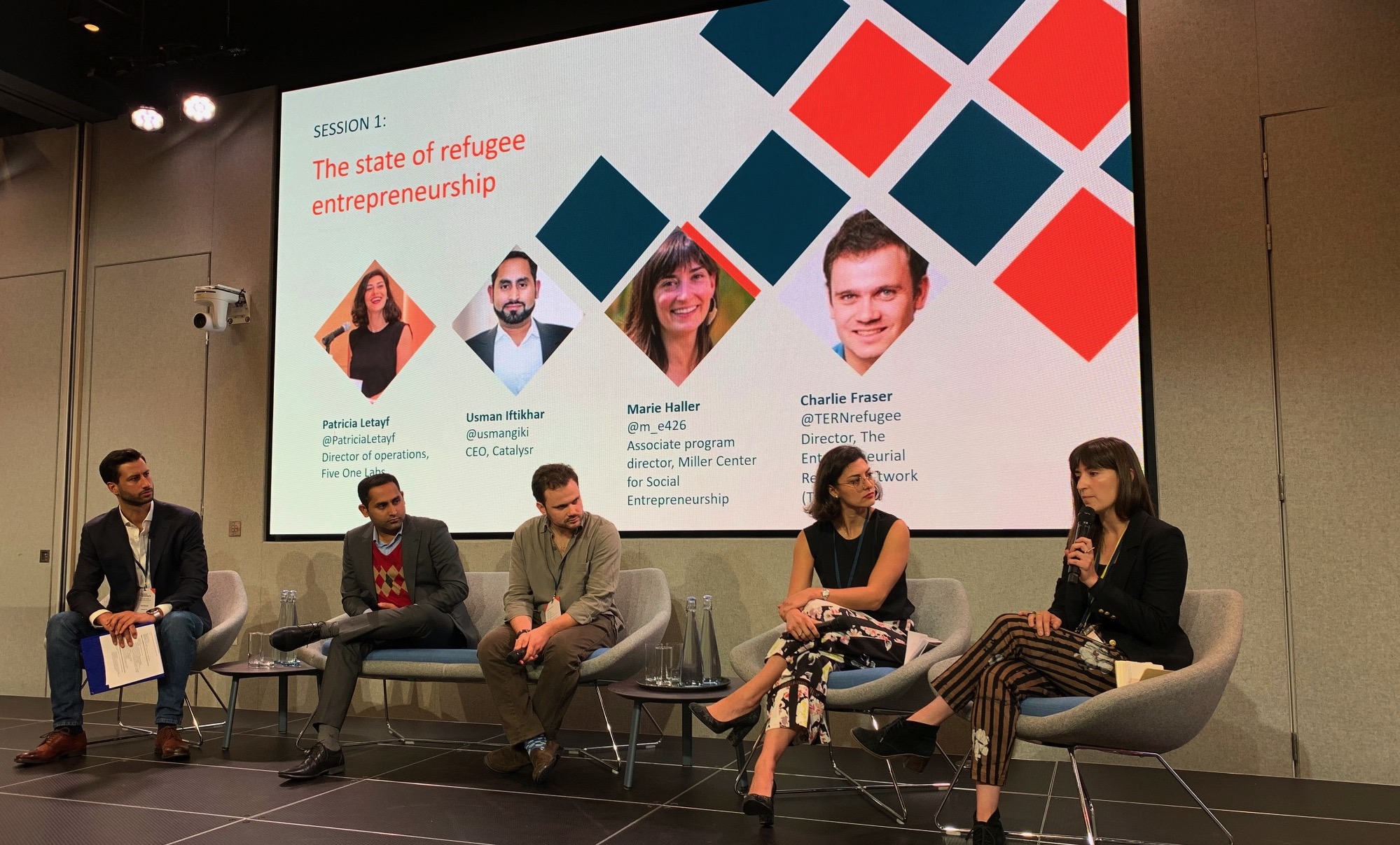 The second Global Refugee Entrepreneurship Summit took place in London last month, hosted by the Centre for Entrepreneurs, the UK’s leading entrepreneurship foundation, and sponsors Natwest Bank and the Said Foundation. Over 140 representatives from government, non-profit, academic and private sectors met at the NatWest Conference Center for compelling, insightful conversations about how best to build evidence for – and inspire growing global support for – supporting entrepreneurship as a means of livelihood for the 26 million refugees worldwide.

The two-day summit opened with high-energy welcome remarks from conference host, entrepreneur, and founding partner of Turn Partners, Mike Bander, a graduate of NEF Fast Track, who challenged attendees to participate in in-depth discussions about the critical challenges facing refugees. 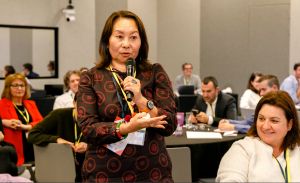 He also chaired each of the five sessions, posing a series of thoughtful questions to the panelists, questions that were then discussed at each of our tables. Representatives from each table then reported back to the full room on their discussion, and proposed actions & next steps. This format not only encouraged deep thinking and collaboration but also allowed ample opportunity for participation from as many summit attendees as possible.

The first session, “The State of Refugee Entrepreneurship,” celebrated the successes achieved over the past year and addressed the challenges organizations are currently facing. Some important points were raised by Patricia Letayf, co-founder of Five One Labs in Iraq, who noted that the media doesn’t often cover how tech and entrepreneurship are booming in Iraq and other areas of the middle-east, creating opportunities for refugees; Charlie Fraser of TERN, who spoke about the need for access to financing; Marie Hailer of the Miller Center for Social Entrepreneurship, who spoke about need to “amplify support” through mentorship and peer support; and finally Usman Iftikhar, CEO of Sydney-based startup incubator Catalysr, who reminded us that climate change will displace 2 billion more refugees. Our key takeaway from this session was the need to build a positive narrative by highlighting the entrepreneurial capabilities of refugees, examples of their contributions to local economies, and the urgent coming impact of climate change.

I was particularly interested in the second session, “The Role of Government,” given how critical government support is in helping CDFIs 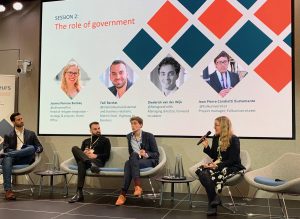 like BCNA build on our successes supporting entrepreneurship. Joanna Penrose Buckley, of the UK Home Office, provided practical examples of how her office supports refugee entrepreneurship, the need to understand that many of the refugees are previous business owners, and the need to make entrepreneurship an option for work force programs. A favorite moment – we all cheered! – was when Fadi Barakat, of Swedish program Highway to Business, said they call refugees “New Swedes” and advocate for adapting to the needs of refugees rather than trying to force them to adapt to us. He also called for more aggressive means of providing access to credit for refugees and migrants. I was pleased to be able to share BCNA’s data about our services for refugees and the impact of having made more that seven million dollars in loans to refugees and assisting over 3,500 businesses. And great input as well from panelist Diederick van der Wijk of Forward Incubator.

The panel for the third session, “The Role of the Private Sector,” 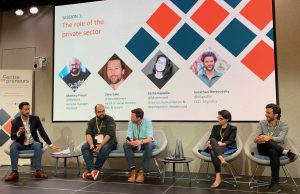 included Mathieu Proust of WeWork UK; Chris Gale of Ben and Jerry’s UK; Sasha Kapadia of Mastercard France; and Jonathan Berezovsky of Migraflix Brazil. Topics included corporate pledges from companies to hire refugees (including Starbucks and Chobani) and how AirBNB supports refugees in Brazil by promoting the various experiences that they can provide visitors through language instruction, ethnic food, and entertainment.

Panelists for the fourth session, “The role of investors & financiers,” included Tim Docking of the Refugee Investment Network, Lev Plaves of Kiva, and Stephen Millard of Included VC. I particularly enjoyed chatting with Stephen Millard about the Fellows Program at Included VC which has hired and trained a very diverse group of men and women to create a pool of VC’s of whose very different backgrounds, ethnicities, perspectives and world views make them better able to identify refugee businesses that are ready for VC investments.

The fifth session was a video conference with Valentina Primo, founder of Startups Without Borders in Egypt, an organization that is already implementing the best practices discussed at this summit.

Day 2 consisted of smaller presentations at the WeWork office, a terrific 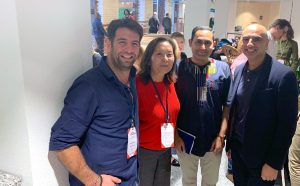 opportunity for attendees to network and connect one-to-one.

I very much enjoyed a chance to chat with Tim Docking from the US Refugee Investment Network and learn about their plans to increase impact investing in refugee owned businesses as well as how BCNA can partner with RIN to inform and promote best practices in supporting refugee resettled in the US. And it was wonderful to spend some time with Vasili Sofiadellis, Founder and CEO of  Changemakers Lab; and Usman Iftikhar, CEO of Catalysr, both of whom were interviewed for the Policy Guide on Entrepreneurship for Migrants and Refugees, by UNCTAD, IOM, and UNHCR in 2018.

Heartfelt thanks to the brilliant team at CFE – Friederike Andreas, Lead Researcher; Bryony Nicholson, Community Manager; Silvia Paloschi, Progect Manager; and Matt Smith, Director of Policy, for a terrific, important event. I came away feeling inspired by not only the extraordinary panelists, but all my fellow attendees as well, and am already looking forward to the 3rd annual summit next year. 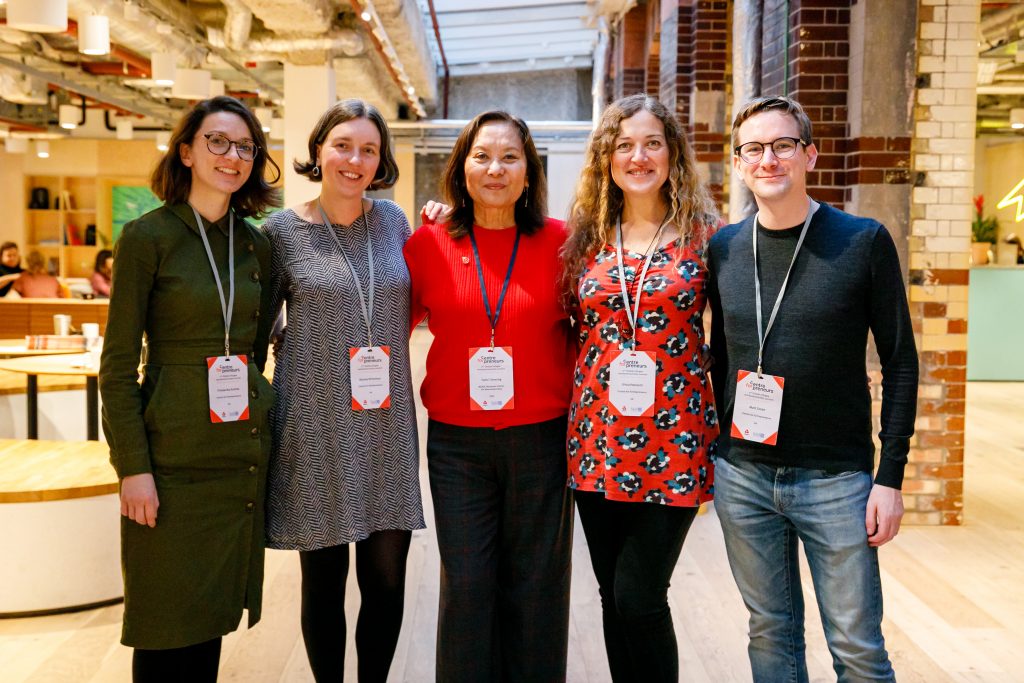